Successfully existing beyond any survival situations means being prepared ahead of time, not waiting until the catastrophe is actually happening to try to prepare. Just because the probability of a specific disaster occurring to one individual or a group of individuals may be a million to one doesn't indicate that it won't happen at some point in time. Quantum physics even suggests that the impossibility of something happening does not actually exist, given an infinite time frame. 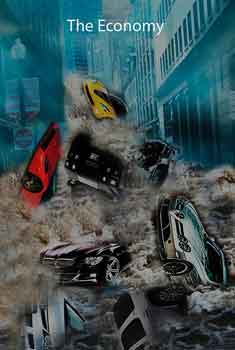 The logic behind crisis preparedness is simply this: "failing to prepare is preparing to fail." In this unstable and erratic world, people are always preparing for certain things but not for others. For example, homeowners purchase insurance for their homes when the chance of having to use it is really quite slim, but they "prepare" for a disaster by doing so. Some might even take out extra insurance, such as tornado or flood insurance, but live in a region of the country that rarely experiences tornadoes or floods. Why is that?

In addition to tornado preparedness and flood preparedness, people get ready for other survival situations and choose to safeguard their lives by engaging in:

Savings accounts, IRAs, investing in gold and even stashing money away in safes or other inaccessible places are the most common ways in which individuals prepare for a financial crisis, whether is it personal or national. However, having food put back so that when you lose your job, when your husband is sick and can't work, or when it's a choice of fixing the car or eating, food will be just one less thing you have to buy.

Economic Collapse Headed for U.S. in 2015

The last thing Wall Street is thinking about is an economic collapse in 2015. After all, the stock markets are at record highs, unemployment is down, and inflation is in check. But the fact of the matter is that these same indicators were also in check before the markets crashed in 1987, 2000, and 2008/09. Read more

Living in an earthquake-prone area of the country means building homes that are resistant to earthquake damage as well as stocking a cellar or basement with first aid equipment, food and other necessities. It may also meaning having a bug-home bag in your car, so if the Big One occurs while you are at work, you can make it home.

"We know we cannot underestimate the importance of emergency planning in our region, nor can we assume we'll have ample warning time. If an earthquake or terrorist attack hits, we won't necessarily have advance alerts or opportunities to double- and triple-check our plans."

Living around the Gulf of Mexico or southeastern coast of the U.S. requires always being prepared for a possible hurricane, by maintaining supplies of fresh water, food, batteries, generators and other items needed in case the power is out for several weeks.

"We cannot stop natural disasters but we can arm ourselves with knowledge: so many lives wouldn't have to be lost if there was enough disaster preparedness."

Conserving water by washing only full loads, using buckets to catch water that drips out of air conditioners and keeping a supply of bottled water on hand at all times are some ways to prepare during times of drought. Another way is to install a rain-catchment system off of every roof on your property.

"Our farmers and ranchers have never faced as many problems as they do today with drought, range fires, high gas prices and an ever tightening budget on agriculture subsidies".

"Once we start deliberately messing with the climate systems, we could inadvertently shift rainfall patterns (climate models have shown that rainfall in the Amazon might be particularly vulnerable), causing collapse of ecosystems, drought, famine, and more."

While temporary food shortages can occur because of severe weather destroying a certain area and making it difficult for supplies to reach that area, the potential for a widespread food shortage affecting the U.S. as well as the rest of the world always exists. Skyrocketing inflation could limit food availability, while fuel shortages provoked by problems in the Middle East could sharply curtail transportation services needed to get food to all regions of the world. Survival situations involving food are perhaps the most important to address since food and water are what we essentially need to stay alive.

Ways in which to prepare for a food crisis include: 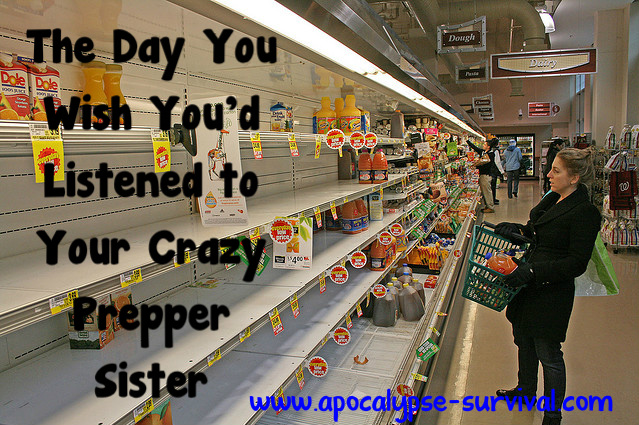 Survival situations used to be primarily based on weather-related calamities. However, within the past several decades, biological weapons, such as dirty bombs made of highly infectious bacterial and viral diseases and toxins such as ricin, are readily available to terrorists and are considered potential "slate-wipers," i.e., capable of exterminating millions of individuals. Other mega disasters, however far-feteched that have the potential of radically changing life forever, include:

Pandemic preparedness in the event of bio warfare is best accomplished by having a shelter to which to retreat until the danger of infection or contamination has passed. Some items useful to have on hand for bioterrorism preparedness include:

Remember that, in the event of any survival situations, all necessary supplies will no doubt vanish from store shelves within a matter of hours. By starting to prepare now for a worst-case scenario, you can protect yourself and your family from the most severe natural or man-made disaster.


Return from Survival Situations to Home