The existence and threat of biological weapons makes bioterrorism preparedness an important part of anyone planning a survival strategy.

While biological warfare is the most cowardly and vile form of warfare, warring factions have used it for centuries. The first known instance was in 1346 when Tartars catapulted plague infected bodies into a city, which resulted in an outbreak of the plague.

Since that time, the delivery mechanism and strain of biological agents has increased to include many more deadly forms. Countries around the world have signed treaties to stop the creation and proliferation of biological weapons, but they still exist. 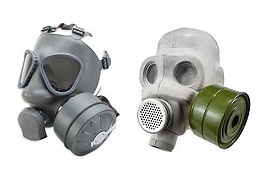 What is Bioterrorism and is the Threat Real?

Bioterrorism is the release of biological agents such as viruses, bacteria and germs to cause harm to the population at large by a group or an individual to further their political or social agenda. One of the most effective biological attacks in recent memory is that of the Sarin gas attack in Tokyo carried out by the Aum Shinrikyo Cult in 1995, which resulted in 12 deaths, and injuring hundreds. While it is a high consequence- low probability event, that does not mean it cannot happen as it did in Tokyo.

A bioterrorism attack is very real because those willing to carry out this type of violence have access to the biological agents.

The agents used to carry out a bioterrorism attack are classified into three categories. This classification system is used to determine the effectiveness of the agent in spreading and causing damage to people, animals, plants, water and food supplies in any given location.

Category A agents are very dangerous to the public, they are easily transmitted from person to person with high death rates resulting in physical as well as psychological effect causing panic in the social structure. Individuals, public and private organizations must make special bioterrorism preparedness plans in dealing with Category A attacks. Some of these agents in this category include:

The difficulty in effective bioterrorism preparedness for such attacks is in most of Category A exposures, the symptoms appear slowly and the infection spreads before anyone is aware they have been infected with one of these agents.

If these agents are not properly monitored they can be misclassified or overlooked completely.

Category C agents include the most dangerous form of biological attacks because they are emerging pathogens that are easily available and engineered for mass production and diffusion. These agents also result in high morbidity and mortality rates straining health resources, and include:

While all biological attacks have the potential to spread quickly, the public can help reduce this threat by being aware of symptoms and reporting them immediately.

Bioterrorism Preparedness Versus an Attack

The best way to prepare for a biological attack is to have enough food, water, money, medications and other supplies to last you for a minimum of one week. This is in the event that the community in which you live is overwhelmed with emergency response, straining the resources available to them.

Unlike other disasters a biological attack does not destroy infrastructure such as power, communication and transportation giving the authorities the tools to control the outbreak caused by the attack.

Bioterrorism preparedness is awareness of your community and the people that live in it and observing and reporting any unusual medical conditions affecting where you live as soon as possible.

Bioterrorism preparedness means being able to recognize a possible attack and relaying the information to the authorities to stop the outbreak from infecting your family, friends and community at large. Detecting a biological attack is difficult but if you see a large number of sick people in one area and witness different dead animals such as pets and livestock, it could be the result of an attack.

If you have children, they are more susceptible to these agents. so keep an eye for any symptoms of an illness. Their inability to communicate their condition also makes children more vulnerable delaying appropriate treatment. If your child is experiencing any unexplained symptoms take them to your doctor immediately.

Action in the Event of an Attack

Most biological agents cannot infect you if your skin is intact meaning you do not have any open wounds. Take off your clothes place it in a plastic bag, seal it and wash your body with soap and water. If the agent is airborne, you may already be exposed and showering will remove it from your body stopping it from spreading any further.

Bioterrorism preparedness might mean setting up an isolation room in the event, you are infected and you do not have access to medical care. Isolation from other people will prevent you from spreading the agent to your family and other people in your community. Call the authorities and inform them about your condition. If the attack is large enough, the authorities may isolate the community in their homes, determine who is infected and who should be quarantined. Listen to the radio or television to get the most up to date information.

Although bioterrorism preparedness might include purchasing a gas mask to ward against inhaling toxic elements, it has its limitations. The use of gas masks is only effective before an attack and if you were not wearing it when the event happened it is not of any use.

Terrorists can use any number of agents making it difficult to stock pile the medications needed to address each virus, bacteria or germ. Doctors prescribe antibiotics for different bacteria but antibiotics are not effective on all bacteria and they are completely ineffective against viruses. Antibiotics also have a shelf life and if you store them for a long time they lose their strength or efficacy.

If you plan to keep medications make sure you rotate them in a timely manner to ensure they are effective when you need them. Bioterrorism preparedness is not an exact science because of the many variables involved in protecting your self from such an attack. The best case scenario in this situation is to get timely information from the authorities on the type of agent used in the attack and determining if you have been infected to take the appropriate treatment.