Ever since ancient Rome, apocalypse predictions have gripped the minds of people fearing that the end of times would shortly occur. Many of these foreboding statements were based on omens, myths, number patterns and biblical end time prophecies.

The Four Horsemen of the Apocalypse 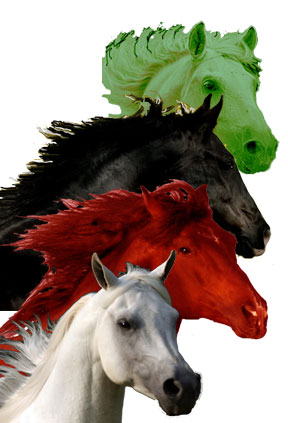 The four horsemen of the Apocalypse is from the Bible, Revelation 6, where John the Revelator sees four differently-colored horses with riders, each representing specific events in the future. The first, a white horse (Revelation 6:2), was ridden by a man bent on conquest. Second was a “fiery red” horse, with a rider who had the power to “take peace from the earth.”

The third horse is black with a rider holding a pair of scales. A voice proclaims “a quart of wheat for a day’s wages…” In those days a quart of wheat would make a loaf of bread, so this horseman represented famine, perhaps caused by hyper-inflation.

The fourth horse is described in Revelation 6:8 as being a “pale horse” who is ridden by Death, with Hades following him. They are given “power over a fourth of the earth” to cause death by sword (war), famine (often follows war), and plague (the natural result of war and famine), as well as “by the wild beasts of the earth.”

The four horsemen are just the opening salvo in the judgments, disaster, death and destruction foretold in Revelation.

From the Book of Daniel to Revelation, the Bible is full of prophecies of the “end of the age”…or The End of the World as We Know It (teotwawki). Often described as the “Day of the Lord”, “Jacob’s Troubles”, the time is described using words like “apocalypse”, “great tribulation”, antichrist, 666 and Armageddon.

Of course, the Bible is not the only ancient source of apocalypse predictions.

As one of the most famous prognosticators was the seer, Nostradamus, his true name Michel de Nostredame, who lived in 16th century France and later became the Royal Physician to King Charles IX as well as a renown soothsayer. He wrote many of his prophetic visions in quatrain form, which is a poem comprised of four, rhymed lines constituting an idea or representation.

Nostradamus employed metaphors and symbolism in his apocalypse predictions, which he is supposed to have intentionally obfuscated in order to avoid being arrested as a fortune-teller. One of his more famous or infamous quatrains supposedly refers to Hitler:

"Beasts ferocious from hunger will swim across rivers:
The greater part of the region will be against the Hister,
The great one will cause it to be dragged in an iron cage,
When the German child will observe nothing".

Many interpreters consider this another name for Hitler, especially since Nostradamus makes note of a "German child" in the last line of the quatrain.

One consistent theme coloring most of his quatrains is the prediction that Muslim organizations will invade Europe lead by the "Antichrist". Nostradamus has also been credited with foreseeing the September 11 attacks on the World Trade Centers, as well as the Great Fire of London.

Interestingly, he does not appear to have predicted any sort of Armageddon, or end of the world scenario, in any of his quatrains. That forecast belongs to the Mayans.

The apocalypse 2012 is widely known as the Mayan Prophecy, which is one of many apocalypse predictions embraced, or at least studied, by many throughout the world.

This end of the age prophecy is based on the Mayan calendar, which abruptly stops on December 12, 2012. Because the ancient Mayan civilization practiced advanced techniques of mathematics and astronomical observations, many people think they had the intelligence to develop an omniscient and fateful calendar that foretells of the end of civilization.

Mankind have always been interested in what the future holds, and throughout history men and women, Mother Shipton to Edgar Cayce, have come forward with apocalypse predictions. Some gave dates, some did not, and most of those dates have passed rather unspectacularly.

With the rise of the Internet, more and more people are searching for answers as to what it going on in the world. From Y2K, which was a bust, to the most recent preacher that predicted the end sometime in May 2011, a lot of buzz is generated, but so far…nada. Nothing.

And Still We Wait

Usually when people consider apocalypse predictions they are referring to religious beliefs claiming that civilization and the world, as we know it will end soon. According to numerous end of the world predictions, this tumultuous termination of earthly life will be caused by either global war, famine, weather-related catastrophes or some other powerful event.

Another common thread connecting doomsday predictions is that a final confrontation between good and evil will take place on earth, effectively annihilating everyone but the believers of the "good" entity who will ultimately triumph.

And still we wait….because anyone who watches the news will tell you that with the war and famine, earthquakes and a trashed economy, that maybe, just maybe there is something to these apocalypse predictions.

More About Predictions and Prophecies