Four Horsemen of the Apocalypse

Recent cataclysmic events have focused attention on the Four Horsemen of the Apocalypse, the main subject of the Book of Revelations found in the Bible. These horsemen are thought to be symbolic revealers signifying the end of times, as shown by Jesus to John in the last book of the Bible. 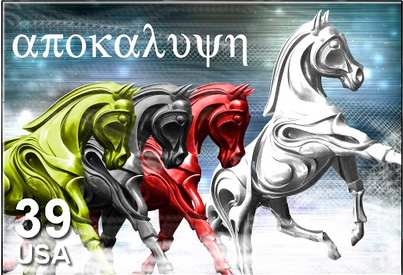 Whenever the Lamb, which represents Jesus, opens one of the four seals, a horseman is released, announcing one of the four calamities that will contribute to the end of civilization as we know it. Many people believe that those horsemen have been released, so let's look at the Four Horsemen of the Apocalypse.

The first horse is white, with the rider carrying a bow but no arrows, but he is "given" a crown instead of aggressively taking one, which is sometimes interpreted as a "bloodless victory" because war is not mentioned in the description. Some see this as a sort of political coup and/or religious deception that may suggest the impending appearance of the Antichrist and the use of his cunning and deceptive methods of taking control.

The white horse and its rider of the Four Horsemen of the Apocalypse bring tremendous suffering to the people on Earth because he intends "to conquer" by religious deception. This foreshadows an aspect of the end of times when Christ returns and saves the believers who have resisted religious deception.

Many point to the move for a One-World Religion, supported by the Pope and the United Nations, as the beginning of this religious deception. They see the push to blend Christianity with Islam, better known as "Chrislam," as the ultimate evil.

The second horseman of the Four Horsemen of the Apocalypse bears a sword and rides on a red horse. Most scholars interpret this as symbolic of war and bloodshed, but not the kind seen in typical wars.

Many think the second horseman forebodes a period of cataclysmic war that is much worse than both world wars combined. This also refers back to Matthew 24:6, in which verse 7 states "nation shall rise against nation, and kingdom against kingdom."

According to popular belief, this global state of war will be nuclear in nature, since many nations now have or will have the technology to build and launch intercontinental ballistic missiles.

Other scriptures are believed to point to a nuclear attack in the Middle East involving Iran and Israel, particularly Zechariah 5. With this in mind, think about recent news reports of Iran's statement that they are within months of having the capability of sending a nuclear missile into Israel.

Riding a black horse and holding a set of scales, the third horseman of the Four Horsemen of the Apocalypse speaks in a dark and hostile voice about the large amounts of money needed to purchase food staples such as barley and wheat. However, the prices of unnecessary items like "wine and oil" will not be raised.

Most people interpret this horseman as being the one who brings about such a spiraling inflation that it will take an entire day's wage to buy a loaf of bread. Have you been shopping lately? There is no denying that food prices are only going up, up, up.

In addition, this may also portend the food shortages and famines that inevitably follow wars such as the global war suggested by the second horseman of the Four Horsemen of the Apocalypse.

Biblical scholars and laymen suggest that as a result of the first horseman, religious deception, followed by the second horseman, war, the third horseman, famine, will quickly follow. Not only will this famine decimate populations in developing countries but it will strike developed countries as well, such as the U.S. and the European nations.

According to common interpretations of Ezekiel 5:12, 1/3 of the citizens of the U.S. as well as Britain, Canada and other countries will be eliminated by war, famine and disease. Verse 10 is even said to describe the desperate act of cannibalism in response to such dire and widespread famine.

The last of the Four Horsemen of the Apocalypse is the fourth individual who rides a pale, or "sickly green" (the translation of the Greek word), horse resembling the pallor of corpses. No interpretation is needed for this horseman because he is specifically referred to as Death, but some also add the label of Pestilence and Disease to this rider.

Hades is his companion as he skulks around searching for blood and the dying. In addition to controlling whether someone lives or dies, the fourth horseman also possesses the powers of religious deception, war and famine as well.

Also included in the Four Horsemen of the Apocalypse chronicle is a fifth horseman. This is taken to be Jesus Christ, who will appear wearing a royal crown and riding a white horse in order to bring healing and salvation to those who have had faith in his return.

Many people link recent events as portending that the end is near. These signs include:

The growing and looming threat of nuclear war, as well as the other signs, are seen by some Believers that the Four Horsemen of the Apocalypse are now riding and will soon spread death and destruction throughout the world.

Return from Four Horsemen of the Apocalypse to Apocalypse Predictions