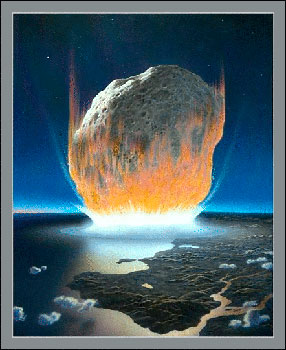 For example, the chances of an asteroid or comet striking the Earth are slim, but the possibility will always exist as long as our planet continues orbiting the Sun. The truth is that depending on the size of the asteroid, such a disaster could disrupt atmospheric and climactic conditions enough to throw the planet into years of perpetual darkness, cooler temperatures, and the inability for many plant and animal species, including humans, to survive.

The Cretaceous-Tertiary extinction event that exterminated the dinosaurs was the result of an immense asteroid hitting the Earth. The impact threw millions of tons of dust and moisture into the atmosphere when the asteroid struck the Yucatan Peninsula. It reduced the amount of sunlight reaching the earth and decreasing temperatures all over the world became commonplace.

Being aware of what will happen following an asteroid strike precipitates the need for Natural Disaster Preparedness in order to maximize chances for survival. If an asteroid the size of the dinosaur extinction asteroid hits the Earth, the following will definitely occur:

Shelters providing medicine, food and water will not be able to accommodate the onslaught of people seeking help. In addition, recuperating from a massive asteroid strike may take decades, during which time at least 75 percent of all plant and animal life will die out.

To boost chancing of surviving the post-apocalyptic world following an asteroid strike, survivalist measures should include these disaster preparedness techniques:

A caldera is an odd feature of a volcano created when land collapses after a volcano has erupted. Usually shaped like a cauldron, a caldera is rich with magma, minerals, and igneous rocks that combine to trap gases at extremely high pressures. Magma can explode due to decompression and spread ash over large areas. However, if the volcano remains active, the middle of the caldera may rise to form a "resurgent dome" such as the one in Yellowstone, and cause a massive eruption resulting in considerable destruction and a global decrease in temperatures.

Disaster preparedness following an eruption of Yellowstone National Park's Caldera would involve anticipating an inevitable deadly cloud of toxic air sweeping over most of the U.S., in addition to the mass migration of millions of people searching for food and shelter.

Goggles and dust masks may be just as valuable as clean water during this time. Basic survival strategies should be followed in regards to this type of disaster, with emphasis on self-defense due to so many desperate people displaced by the eruption and lack of governmental assistance.

With proof from previous disasters that the government cannot be relied on to provide organized and expeditious assistance in the event of a natural or manufactured catastrophe, natural disaster preparedness lies solely with you. Continuously learning new survival techniques, checking supplies periodically and knowing exactly what to do when something unexpected destroys most of the world is not something about which to think, it is essential to the survival of you and your family.