Your Zombie Apocalypse - A time to fight the undead hoards; are you a zombie killer?

Ok this is a bit of fun for an addled mind, as there are far more real & important things to prepare for - but it’s just an exercise to get your grey matter working – could you survive a zombie plague & Zombie apocalypse?

NB: Oh yes I should mention we are dealing with the straight-forward “undead” here, that follow the rules of physics (if that isn’t a contradiction in terms – which it is) – not anything magical – like immortal skeletons, or the living carrying a rage virus of some kind. 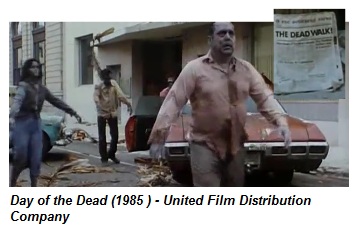 In this age of rolling 24-hour news, you’d more than likely know well in advance of a Zombie apocalypse. It’s widely regarded using current population figures from the very first zombie bite – it would take about 4-5 weeks for the entire world to be affected (or indeed infected).

That’s without counting the police, National Guard AND the army doing something about it. Not to mention local militia, quarantine restrictions and reduction in flights, ferries, road blocks etc. etc. So in most cases it would take longer than a few weeks for a Zombie apocalypse to be knocking on your door – unless you were unfortunate enough to have THE initial outbreak in your city.

So this would be your chance to stock up on water, food, fuel, medicine, weapons, ammunition and begin your plan of barricade or flee to a remote area? Panic buying would most likely happen in the final few weeks, so you need to be WELL stocked up before then.

This is the worst case scenario, the powers that be have been over-run and you see a zombie walking up your street. If you have gone the barricade way, this is the time to stay silent.

If your home is secure and you have a ton of food and water you should be in the best place possible. Remain upstairs as much as possible as you're less likely to be sighted by any passing zombie – you could even remove the stairway and replace it with a ladder if you get time. But loud hacking noises and breaking wood may draw attention to your home.

Also keep the TV and radio on at a low volume, you need to know what’s going on from trusted reliable sources….talk radio might be fun….but when the power goes out, knowing what Rhianna had for breakfast won’t help you in a serious disaster situation.

Sure you could take over a shopping mall in a Zombie apocalypse, but try rolling up to the mall gates with your shotgun and asking for the keys, it could be problematic. You might be able to do this AFTER the zombies are wandering but do you really want to go outside?

If you're able to get (or acquire) a decent sized boat/ Yacht which you’ve managed to stock with dried food and you have a reliable “desalination device” you should be free from attack, and you will have an endless supply of water. But you must shore up well out of harm’s way. But far enough inshore - so you can check on the condition of the shore with a pair of binoculars (zombies moving etc.). You do of course run the risk of storms and your boat being damaged within the first month; which could expose you to any un-dead that’s still walking about.

Ok back to the homestead - When I watched TV recently, and saw cops trying to break down new PVC front doors & double glazed windows (in Europe) with a battering ram, it’s easy to see they’re not easy to break – they took over several minutes using sophisticated police techniques and wasted precious time.

Why is that? – Those doors have a degree of flexibility and strength, - which a single zombie would struggle with. Plus if you have triple glazed windows too, you’re more than rockin’ – have you ever tried to break a double glazed window with your bare fist? – Ok that wasn’t an invitation.

Though you must still stay silent, if 3000 zombies turn up because you’ve been playing black Sabbath all morning, then your doors and windows might not hold up – in fact they won’t.

Your lower curtains drawn would disguise any interior movement, and any lower windows would need strengthening, if they are of the old wooden variety. Doors and gates would need to be re-enforced, and your vehicle waiting outside with doors unlocked, but the ignition keys in your pocket should you need to flee quickly.

Ok, now let’s assume you have your guns, crossbows, dried food, or MRE meals and you have filled every conceivable thing with drinking water. What’s your chance of Zombie apocalypse survival?

Well the one thing that’s in your favor is TIME. It’s also the one thing the movies don’t ever seem to address. If we have a rotting corpse, they will now be getting weaker as you get stronger.

Of course the first few weeks of a Zombie apocalypse will be the most dangerous, so you need to stay hidden and undiscovered and then your chances will improve. One zombie seeing you, might draw others and you’ll then have to flee, putting you in unknown danger and finding shelter & food on-the-fly.

Time waits for no man – or zombie.

First off if the zombies are going around biting each other and many zombies WILL have massive blood loss, by simple rules of pneumatics, the pints of blood which was used to move their arms and legs (when human) will have been expelled all over the place - and they’ll simply be squashy bundles of carrion unable to budge an inch on the ground. (But don’t get too close though – you could get infected).

Next the ones that can walk around, will begin to deteriorate, if its summertime they’ll deteriorate faster – and a bit slower if it’s in the winter.

Major Decomposition of a human body takes around 1 month in hot climates to 2 months in cold. But if they are feasting on human flesh and are following the same rules as us poor mortals it will take about 3 weeks to starve to death (i.e. lack of human brains and tissue).

But there is some MORE good news however – it’s been proven that eyes in corpses deteriorated very quickly after 4 hours, and it’s also thought that smell & hearing would be impaired too after a few days. So the zombies your likely to encounter at the end of week 1 would be noticeably weaker than they were on day 1. A caveat to that is, it still wouldn’t be a good idea to be wandering around during this time, as a recent survivor may have been turned into a zombie that very day, and you could find yourself battling for your life with a fast & strong Zombie apocalypse victim.

During the first week, as well as rationing your food, you should be listening to the emergency channels and making a note of what’s happening before the electricity dies. Of course a wind-up radio would be an essential in such an event.Morale would be greatly improved if you are planning for your future after the outbreak has subsided, and your intentions on where you will go, and so forth. 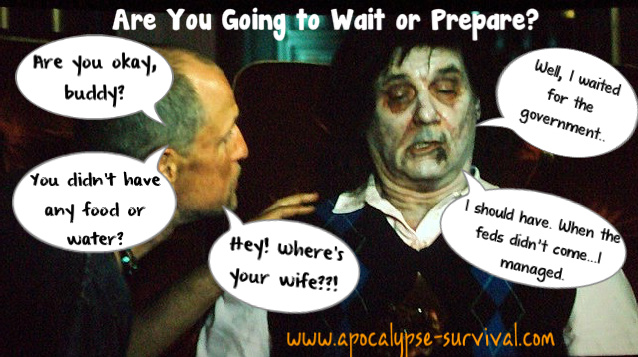 Venturing out in the Zombie apocalypse.

Ideally you shouldn’t be venturing out, within 30 days of your first zombie sighting but let’s say your desperate for food, water, medicine - whatever. Your best foraging destinations are not in the city as there will still be many zombie apocalypse stragglers wanting to eat your brains.

So country gas stations, homes, and farms may be your best source of finding supplies. A good machete, your guns and your trusty diesel SUV or 4 wheel drive will be your tools. Hospitals and aid centers should be avoided, as there will be infected bodies and zombies nearby picking on easy flesh.

Forage in the day time, as at night time it’s a lot cooler and there may be more zombies about, plus they’ll be harder to see.It never ceases to amaze me in most zombie flicks how days after an outbreak everyone’s walking around in the most flimsy of garments (t-shirts and vests). But you’ll have your motocross shin, body and arm protectors on – a lone zombie will have a major problem biting through that.

Obviously when going out, you need to be aware of bringing any infection back with you and its best to discard anything hazardous or bloody, and also be sure you’re not sighted as you return to your barricaded homestead. If so you’ll have to deal with that zombie now, rather than later.

A brave new world – and it’s all yours.

Approaching the 2nd month and you have sighted no further walking zombies, you might get bolder in your foraging and formulating a plan with your co-survivors. You may want to investigate emergency radio signals of a possible survivor’s camp(s) or military bases in your area. Or find a farm with a natural well, were your able to start again.

Remember your fuel, food and ammunition may be limited so whatever you decide to do will still affect your survival. You don’t need to waste your precious resources needlessly.

The next 12 to 24 months will also contain perils. Pockets of Zombie apocalypse stragglers sure – but mostly from infection; being near-to rotting corpses and eating them by accident. So obviously you don’t need to be killing and eating any carnivorous animals (or birds) within this 2 yearly time frame - who may have been recently eating zombie flesh. You will have to be ultra-careful to eat only plant eating animals, use some of your canned resources or find new ones and begin to grow your own food & preserve it too. If you’re able to break this steep learning curve you’re sure to do well.

Hard decisions will still need to be made after the Zombie apocalypse, but at least your zombie threat is much reduced, and you won’t have to worry about parking tickets anymore.