Top 11 Tornado Myths and the Truth About Tornadoes

Tornado myths are dangerous and these forceful wind phenomena can occur in any place not just the infamous tornado alley. It can save your life if you have the facts not the fiction about these powerful occurrences in Mother Nature.

Park Under an Overpass 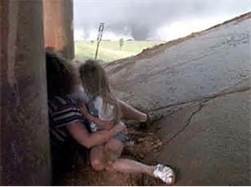 Do not park under an overpass if a tornado is approaching because an overpass actually funnels the winds of a tornado increasing the velocity. If you are in a car, you should seek shelter in a sturdy building and if no shelter is available lie down flat and cover your head. You should be careful of lying in ditches and culverts due to flooding and debris from the storm often collects in the depressions.

One of the common tornado myths is that trailers or mobile homes attract tornadoes, but tornadoes form and travel their course and nothing really attracts or deflects their paths. When fatalities and injuries are pro-rated, more occur within these structures than any others and they generally sustain more damage. This is due to the construction of the mobile homes, not that tornadoes are attracted to the structures.

Open the Windows of Your House

Among tornado myths is the bad advice to open all the windows of your house before the tornado strikes, as this will equalize the pressure inside and outside the house, so it does not explode. Since no house is air tight, the pressure will equalize itself and it is the force of the wind and debris that damages the house, not air pressure. It is bad advice as the open windows allows dangerous debris from the storm to come into the house.

Seek Shelter in the Southwest Corner of a Structure

Another one of the tornado myths is that tornadoes circulate in a northeast direction but tornadoes move from any direction. The safest place in a building is in the lowest level, in an interior room, away from windows and under a sturdy piece of furniture.

Tops of mountains and cold bodies of water are not conducive to forming tornadoes, but they do occasionally form in these areas. Cold water and cool air can stabilize the air but the forces, which form tornadoes, can overpower this stabilizing effect. Witnesses have seen tornadoes cross the Appalachian Mountains, the Mississippi River and large lakes.

The buildings in big cities range from 500 to 1000 feet tall but tornadoes range from 5 to 10 miles in height. Buildings are no match for the powerful winds of tornadoes and just like natural land formations, they cannot deflect tornadoes. Knowing this is one of the many tornado myths, you can seek a safe place to weather the severe storm and not rely on the buildings to protect you.

Tornadoes Occur in Late Spring and Summer Only

Shape of the Tornado Determines How Strong

Property and Crop Wind Damage is Always Due to Tornadoes

Straight-line winds or down-burst winds of severe thunderstorms can reach the strength of EF1, EF2 or EF3 tornadoes and occur 10 times more often than tornadoes. As the name straight-line winds implies, the damage due to these winds leaves debris in straight lines whereas tornadoes leaves it at angles. Professionals often have to determine whether a tornado or down-burst winds occurred.

Although scientists have not ruled out a green sky indicates a tornado is forming, not every green sky means a tornado is imminent. Professionals warn against relying on cloud colors to warn of impending danger. The best advice is to listen to weather updates from the National Weather Service.

The belief that the frequency of tornadoes is increasing and that tornadoes do not strike twice in the same place are two more tornado myths. The National Oceanic and Atmospheric Administration reports a tornado hit one town in Kansas three years in a row and another hit a Church in Arkansas three times. Although the number of recorded tornadoes has increased since before 1950, meteorologists believe the increase in population and the number of people tracking and reporting accounts for the larger numbers.

Tornado myths can be dangerous if you believe in them as you can actually put yourself in danger rather than going for safety. Special shelters can be built to increase the likelihood of surviving without injury a direct hit from a tornado, but knowing the facts about tornadoes will help if you don't have a storm cellar yet.