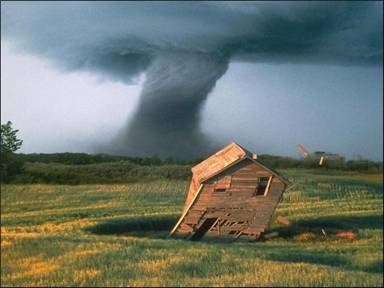 Tornado facts and information are something that everyone should know about and equip themselves with – not only for their own education but also for their personal safety and possibly the safety of their friends and loved ones. By far one of the earth’s most deadly and yet fascinating weather phenomenon, tornadoes can occur anywhere weather permits and can leave a huge path of destruction in their wake.

Most sources of tornado facts and information define the phenomenon as a violently spinning air column that is created when moist, warm air from the South and cool dry air from the North meet and cause a great deal of instability in the atmosphere. In most cases, this happens as the result of a thunderstorm – but not always.

As the winds begin to increase suddenly in different directions, it creates a powerful horizontal rotation that with the help of an updraft will eventually shift upward causing a wider area of rotation within the storm that is typically anywhere from 2-6 miles wide. It is in this large area of rotating area that most tornadoes form.

Tornadoes typically take the form of a spinning funnel that extends from the base of a cloud to the ground. The size and shape varies from tornado to tornado depending on strength, wind speed and the amount of debris it picks up. Some tornadoes can be wide and slow moving while others are thin winding and rope-like.

Meteorologists and weather experts categorize the strength and potential danger threat of a tornado by its wind speed. The strength of a tornado is based on what is known as the ‘Fujita Scale’. This scale contains six categories that are based on the tornado’s wind speed and damage. The scale reads as follows.

While any tornado is dangerous, 69 percent of tornadoes each year are categorized as ‘weak’ tornadoes while 29 percent are labeled as strong and only two percent labeled as violent.

Most sources of tornado facts center around your standard, typical twister, however you may also be interested to know about the several other types of tornadoes and of what they consist.

While this type of weather phenomena is much less common, a waterspout is essentially a very weak tornado that forms over water. If it comes close enough to the land it can come ashore and damage buildings, but they tend to fizzle out before they get that far.

This type of funnel is not technically a tornado but rather a very weak whirlwind that typically forms along the edge of a windy front. These commonly have a rotating dust cloud on the ground but the funnel is not associated with a cloud.

A landspout is commonly referred to as the on-ground version of a waterspout. This type of tornado occurs spontaneously and is not associated with a wall cloud as a typical tornado would be. These storms are very weak and often dissipate as quickly as they start.

While educating yourself about tornado facts will not prevent them from occurring, knowing about how they form, the types and the potential dangers can make a huge impact in your ability to keep yourself and your loved ones safe. Keep in mind that all storms of this nature are dangerous so be sure to do your research and also educate yourself on ways to keep your family safe during a tornado if one were to occur in your area.