Individuals living in the world of survival preparedness are referred to as "preppers," "survivalists" and sometimes "doomers" because they choose to be prepared in the event a disaster occurs. 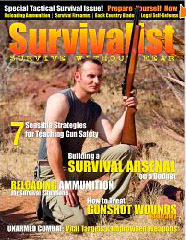 Survivalists of the past were seen as radical extremists who chose to isolate themselves in the Utah wilderness and live like "off-the-grid" pioneers. They were also viewed as a danger due to their belief in limited government and the right to defend their rights using guns.

However, in the past 20 years, preparing for survival and learning skills that now seem unnecessary—gardening, foraging, trapping, canning, weaving and even blacksmithing—is seen as an acceptable, resourceful and rational lifestyle.

Beginning with the invention of the atomic bomb and the initiation of the Cold War in the late 1940s, the world of survival has spawned popular book publications, television shows, businesses selling survival items and numerous organizations designed for preppers who discuss and share advice regarding survival techniques.

Following the terrorist attack of September 11, 2001, interest in survival and preparedness experienced a marked resurgence. Fueled by the unexpectedness of the attack and the realization that a devastating, almost apocalyptic event could occur at any time, people of all walks of life began to think about how to protect themselves and their family against the craziness.

Since then, the world has seen various disasters detrimentally affecting the lives of millions of people. Beginning with 9/11, the U.S. has since then experienced massive flooding, participation in Middle East conflicts, bioterrorism, record tornado outbreaks, blizzards, droughts, epidemics of food contamination and a crippling recession bringing the country to the brink of financial collapse.

In addition, overseas countries have also endured the same events further exacerbated by worldwide economic implosion as well. To many survivalists, this is a clear indication that the world is not as impervious to societal, governmental, and economic disintegration as we once thought it was.

The fundamental belief held by those adhering to the world of survival approach is self-sufficiency. Whether an individual practices urban survival techniques or lives in the country and is able to engage in more long-term survival practices, everything that is learned and performed is designed to promote independence from the capitalistic way of life to which we have all become accustomed.

Because survivalists believe that a complete breakdown in society is possible following a worldwide disaster event, reliance on electricity, instant access to fresh water, prepackaged food, gasoline, and medical assistance needs to be eliminated.

They also hold the view that those who fail to prepare for a catastrophe that effectively eradicates an industrialized way of life will be desperate enough to take by force what they need.

Because of this possible breakdown of law and order, preppers also believe in arming themselves with weapons that will protect their families lives. Theyve seen what happened following Katrina when people turned on each other, looting, raping and killing.

Preppers adhering to survival concepts insist that immediately following a catastrophe, certain items will be almost impossible to obtain and thus tend to keep these items stockpiled in home basements or retreats built especially for surviving an apocalyptic event. Some of these supplies for world of survival concept include:

Survivalists deliberately accumulate these items, in addition to many others, in order to be prepared for shortages and the inevitable disappearance of these staples. They will learn a variety of skills, such as:

No one knows when a catastrophe may totally dismantle everything we currently take for granted, such as clean water, immediate access to medical care, the ability to swipe a debit card to purchase food ready for consumption and feeling relatively safe when taking a walk to the nearest store for milk and bread.

For preppers living in the modus operandi of survival, being prepared and always ready for a disaster means remaining healthy and safe in a world beset with disease, starvation and violence.

Return from World of Survival to Survival Retreat