Gordon Dickson has struck a new chord in readers with his book Wolf and Iron, originally published in 1993 by Tor Books. The state of the world’s economy has given new life to many books that were published decades ago. Now people are sitting up, taking notice and grabbing these kinds of books off the shelves in record rates. 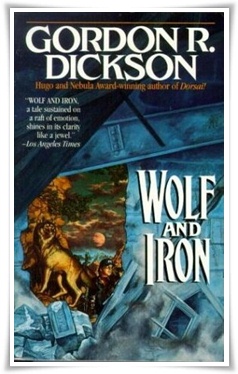 The story begins with a worldwide economic collapse that has completely devastated the United States, which may sound familiar if you have been paying attention to the news lately. In a heartbeat life as we know it has been turned up on its head and chaos reigns. With the constant presence of marauders in the streets, it is not safe to go out anymore. If you are like most people though, you need food, medical supplies and a host of other things that you just cannot find around your home anymore.

Jeremy Bellamy Walthers has a goal. Accompanied by a stray wolf he encounters along the way, Jeremy is going to cross 2000 miles of inhospitable territory in a superhuman effort to not only reach other human survivors but to find his brother’s ranch in Montana. The fact that Jeremy is willing to undertake this inhuman trek without any guarantee of finding his brother alive speaks volumes about the character Gordon has created for us in Wolf and Iron.

The Devil is in the Details

Readers of Wolf and Iron who are looking for a fast and vicious storyline littered with bodies are going to be disappointed with Mr. Dickson’s portrayal of life after the crash. Gordon reveals in his detailed descriptions how to build a shelter, simple weapons, or how to survive different injuries. He even tackles the theme of childbirth and goes into great detail doing so. Mr. Dickson goes on to slow the pace of the story by lingering on simple details and forcing his readers to take a deep breath and relax.

The Wolf and Iron

The main relationship in book revolves around Jeremy and the captive wolf he liberates on his way to find his brother and his ranch in Montana. After many fits and starts they are able to develop a working relationship. Any readers who appreciate a good dog story will immediately appreciate this great wolf story.

Mr. Dickson has obviously done his homework here when it comes to wolves and he uses his new found knowledge to add depth and credibility. Mr. Dickson’s character does find love in a woman he meets in a caravan, but he always returns to his theme of the wolf as man’s new best friend.

If you are looking for the next Hunger Games or Veronica Roth’s Divergent series, this is not going to be the thrill ride for which you may be looking. What you will find in Gordon Dickson’s Wolf and Iron is a realistic look at how life could be after a total world financial collapse.

If you’ve ever wondered how much work would go into just dealing with the very basic things to survive like overcoming injuries or building a shelter you’ll find that here. If you want to find out how much energy it takes just to build a simple fire you won’t be disappointed.

Mr. Dickson trades off violent displays of dystopian life that you find in many novels in this genre for textbook like realism in his portrayals of life after the big disaster. Just hope that no one has to find out just how hard life could be as portrayed in Dickson’s great novel.


Return from Wolf and Iron to Survival Books