The End of the Age: A Novel Based on Biblical Prophecy

Asteroids, earthquakes, tsunamis, and erupting volcanos in The End of the Age by Pat Robertson are only the beginning. If you are looking for an intense, page flipping book that will lead you wanting more, then look no further. This book not only is biblically correct, it is mind blowing in how it unfolds into our unworldly demise. 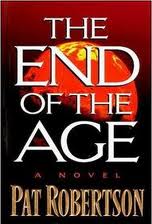 We can’t help but to look upon our own unbelievable disasters in the news today, earthquakes in Port-au-Prince, Christchurch, Lyttelton, and Japan producing horrible aftershocks. Hurricane Katrina, tsunamis off the coast of Sumatra have all claimed thousands of lives and villages. Bodies washing up onto shores, cities left in ruins are the aftermath of just how completely defenseless we are to the power of Mother Nature.

When we step back and look at all the devastating natural disasters that we have survived, we must ponder the thought that Robertson suggests, are these all coincidences, or are they what the Book of Revelation was talking about all along?

We imagine ourselves living in Los Angeles as a kilometer wide asteroid comes hurdling straight down upon our city. Powerless to stop the forces that are targeted towards us the cities crumble in mass hysteria. The effects are catastrophic, triggering a chain of events from earthquakes and fires to tsunamis.

With our predicted doomsday right around the corner, it’s hard not to get wrapped up in Robertson’s religious, political and cultural views. His crafty writing lets us, the reader; enter his mind to see his true views on our most prominent leaders of today.

With all the apocalyptic events we are not forgotten that with any great evil comes an even greater good. While the government system rapidly decays, a self-appointed leader steps up to lead the people out of the darkness. Yet, his fate is equally disappointing.

Though it depicts in great detail what the “end of the world” may feel like, we can’t escape from Robertson’s preachy personal views of politics and religion. It is evident that his views are strong about non-Christians when he takes up long sections ultimately designated to religion.

Is the End of the Age Near?

Regardless to his personal beliefs, you can’t ignore the similarities. The descriptive details leaves you plunging for more. Thoughts can’t help but to race uncontrollably. Robertson’s believable writing of the world’s ticking time bomb makes this novel a bit too real and perhaps striking paranoia into his readers about the unpleasantness of the end of the world coming soon.

We are guided into remembering the texts of the Rapture and the Great Tribulation. After great devastation, suffering, and the War of Armageddon, we ask ourselves, what is Robertson leading us to? Is Jesus really going to return? Will those that are saved join Jesus in the heavenly sky?

Robertson’s persistent strides to map out what has already been stated in the Bible gives an eerie sense that we are about to witness something bigger than we have ever imagined. Though he may not come out with the exact dates in his novel, we are left with the many signs that point us along the way that The End of the Age is near.


Return from The End of the Age to Survival Books