Decades ago, survivalists were thought of as rough and rugged nonconformists living in remote areas of the country, totally isolated from the rest of society. Living like self-sufficient pioneers, shunning commercial electricity, growing their own food and livestock, these "fringe" individuals now comprise a definitive social movement that has grown from a few thousand to several million worldwide over the last 60 years. 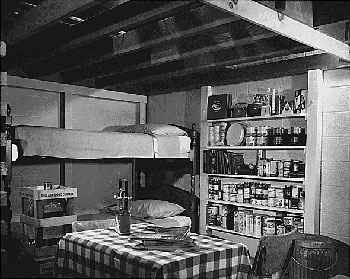 Origins of survivalism ideology formed in the 1950s due to rising tensions between the United States and the U.S.S.R. with the emergence of the Cold War. When the possibility of nuclear devastation became fact rather than science fiction, Americans began constructing bomb or "fallout" shelters in their backyards and basements by the dozens.

A popular "Twilight Zone" episode from that time told the story of small-town citizens violently forcing a neighbor to share his bomb shelter with them because they thought "aliens", symbolic of the Russians, were planning to attack them.

Survivalism gained in popularity as Cold War hostilities continued into the 1960s, along with hyperinflation, the Vietnam War and social unrest. Survivalist's began writing underground literature regarding survival retreat construction, techniques for growing and stocking food and learning to live without government or societal assistance.

The 70s saw the energy crisis, recession and proliferation of nuclear weaponry by both the U.S. and Russia, further stoking the fires of survivalism and the belief that "prepping" for any kind of global disaster would be the only way to survive the coming apocalypse.

With the terrorist attack of 2001, the avian epidemic, the evolution of "superbug" bacteria, waves of epic environmental disasters, climate change creating droughts and floods and the economic collapse of 2007 precipitated by the mortgage lending crisis, survivalism is no longer seen as something eccentric or even ludicrous.

To many people, it seems that the foreboding events of the last decade are simple yet powerful affirmations delineating the tenuousness of existence and the impending end of life, as we know it.

Modern-day survivalist's are influenced by the belief that an apocalyptic event may occur in our lifetime possibly involving natural disasters such as earthquakes, solar storms and tornado outbreaks, and/or man made catastrophes, including conventional or nuclear war, pandemics, food shortages or economic collapse.

The dominant theme influencing this way of life is self-reliance and constantly preparing for a time when food is no longer available for purchase, gas and electric resources are minimal or non-existent and society has collapsed into anarchy with no law enforcement or government assistance.

Many Christian survivalist's believe that the end of the world described metaphorically in the Book of Revelations is happening at this moment. They are preparing specifically for the famine, plagues, war and death as predicted by the Four Horsemen of the Apocalypse, intending to survive the upcoming catastrophe and experience the second coming of Christ.

Alternatively, others holding survivalism beliefs, sans the Biblical aspect, consider recent events such as the civil wars in numerous Middle East countries, the fragility of the U.S. economy and the global economic instability leading to the bankruptcy of European Union members as signals revealing just how dysfunctional and powerless government is against the forces of nature.

One reason the term "prepper" came into common use, was because of the perception of survivalist's as anti-government and militaristic with a focus on "guns, bullets and beans". When those unfamiliar with survivalism were asked to describe those into surviving and prepping, they often described those who wore camo, carried guns everywhere, played war games and were border-line white supremacists.

So those who did not want to be identified by such negative stereotypes, came up with "prepper".

The Unpredictability of the World

Why some people choose to engage in survivalism and others do not involves the complex interplay of personality traits, worldviews and individual perspective regarding the future. If the collapse of society and government does happen, many people believe it will not happen as quickly and acutely as true survivalists do.

They do not think it will be necessary to retreat from society, stockpile goods, and prepare for a time when marauding bands of looters and pillagers will attack and steal from those who have food, water, or gasoline. However, it is actually up to the passing of time, the manifestation of a global collapse and whether or not those who have prepared for an apocalyptic event will be the fortunate ones in the end.