Having a survival stove handy and operable means eating a hot, cooked meal instead of cold, tasteless food. It can also boil water, provide warmth and dry wet socks when necessary. You can make or purchase impromptu stoves, such as soda can stoves, rocket stoves and camping stoves that run on wood, alcohol, solid fuel or sunlight. 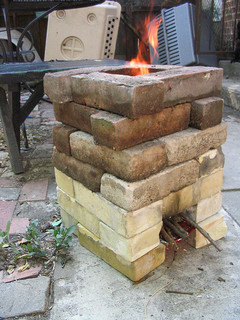 If you plan to use your home as a survival retreat, consider obtaining a solar oven as part of your emergency preparedness plan. Solar stoves are capable of steaming, baking and roasting food quickly by attaining temperatures of 350 degrees Fahrenheit. However, since these stoves require sunlight to work, you should always have a backup stove on which to cook food when sunlight is minimal. Survivalists can purchase portable solar stoves that fold easily for emergency bugouts as well.

Cast iron stoves that burn wood are a must-have for any survival homestead. A properly installed chimney system is all that is required to operate this kind of survival stove and, of course, wood. Cost efficient and reliable, owning a wood-burning stove following a catastrophe that decimates the world's electrical system means you will have heat, illumination, clean water and hot food to eat.

Wax stoves are quick and easy to make during emergencies occurring outside the safety of a survival retreat. To create a wax stove, take a piece of cardboard, preferably corrugated, and insert it securely into a small can. Let melted wax from a burning candle drip into the can until an inch or two covers the cardboard. Put the small can into a larger can and attach a piece of chicken wire over the large can on which to cook food.

Homeless people during the Depression created these stoves that are still popular today. Obtain a soup or vegetable can and punch holes close to the can's bottom. These holes should be about one inch apart and no larger than 1/2 inch in diameter. Next, cut out a small window on one side of the can large enough in which to place twigs as fire fuel. When the stove is larger than the pot used with which to cook, punch holes near the top of the stove in a way that would accommodate metal pieces utilized as a potholder.

Lightweight and dependable, an alcohol stove consists of a metal cup containing alcohol. Because these stoves release no vapors or soot, they can be used in confined areas without fear of succumbing to fumes. However, alcohol stoves provide cooler flames than other stoves running on compressed fuel or propane. As a result, food does not cook as quickly and more fuel is necessary to keep one of these stoves burning.

The open flame alcohol stove is the easiest to construct and use. Essentially, it utilizes a shallow metal container capable of holding alcohol, with a cooking pot sitting above the stove on a wire support. Denatured, grain, methyl and gelled alcohol are common types of fuel used for an alcohol stove. Be aware that gelled alcohol like canned heat or Sterno is not good for cooking food but more for keeping it warm.

Reusable and waterproof Sterno stove kits are also available for purchase that provide four hours of fuel and a carabineer allows attachment to belts or backpacks.

A mini compact stove containing several fuel tabs can also be purchased from stores selling survival equipment. Capable of warming up freeze dried foods as well as boiling water, mini emergency stoves work without emitting fumes so they can be implemented in places where minimal ventilation exists. Be ready for any emergency by keeping one in your bugout bag and in a vehicle survival kit.