By requiring only sunlight to power a solar radio, hikers, campers and people interested in emergency preparedness will always have access to information that could be vital to their survival following a disaster. The only kind of catastrophe that may inhibit the use of a solar powered radio is the detonation of a nuclear device and the possible occurrence of a "nuclear winter" scenario described by scientists who study the after effects of a nuclear war. 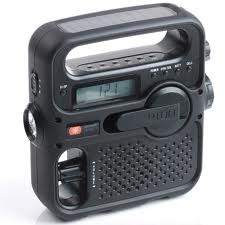 If sunlight is indeed blocked by tons of radioactive dust and debris due to a nuclear weapon, the minimal amount of sunlight filtering through the atmosphere will not provide enough energy to power a solar radio.

A device that captures sunlight for energy needs to be equipped with solar panels containing photovoltaic cells for conversion of sunlight into electricity. Solar cells are usually made with silicon, a semi-conducting material that transforms solar radiation into direct current, or DC, energy. This is performed when photons composing sunlight force electrons out of their orbiting positions around atoms, an action facilitated by solar cells.

However, these displaced electrons are not allowed to scatter everywhere. Instead, the photovoltaic cells produce a type of magnetic force that keeps electrons moving in a linear fashion, which creates a steady, electrical current that is capable of powering a solar radio. 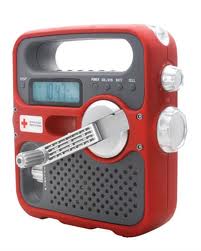 The Eton Corporation not only produces quality solar powered radios but also iPod and iPhone speakers that are powered by sunlight as well as emergency radios operated by dynamo "crank" style generators. The Eton SOLARLINK FR360 is also equipped with an FM/AM tuner and NOAA frequency band receiver.

Other features of this versatile radio include:

To power this solar radio in direct sunlight, simply flip the switch over to the SOLAR/DYN position, a position that also adds power to the rechargeable NiMH (nickel-metal hybrid) batteries. Alternately, cranking the radio for a minute and a half gives you about 15 to 20 minutes of playing time.

Charging a Cell Phone with the Eton SOLARLINK FR360

Having a working cell phone following a disaster can keep you in contact with emergency assistance or with people about whom you are worried. To charge your cell phone using the Eton SOLARLINK, simply plug the phone into the radio using a USB cord and turn the crank fully two or three times per second. Once you see an orange or green LED light turn on above the crank, this means that your cell phone is receiving an adequate amount of power from the radio and can be used to make calls.

The time it takes for a solar radio to gain full power depends on the intensity of the sunlight and how long the radio remains in contact with sunlight. Setting a solar powered radio in mid afternoon sun usually provides the strongest concentration of ultraviolet rays and may help to facilitate charging your radio.