A prepper is someone who "preps" or prepares for impending disasters by stockpiling items essential for survival. Some prep for specific disasters, such as economic, natural or nuclear, while others choose to prep for localized disasters by storing one or two week's worth of food, water and medical supplies. 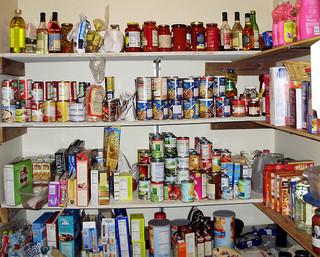 The term applies to people who have extensive back-up plans in case of personal economic events leading to hard times. They formulate survival plans for any type of potential catastrophe in order to be as self-sufficient as possible.

They do not expect government intervention to aid them nor do they expect others to be of assistance. They often separate themselves from survivalists, who they associate with a more militaristic prospective on survival.

A true prepper does not want to rely on things society takes for granted, such as:

Skeptical of the way events have been playing out over the last twenty years, they view events such as the 9/11 terrorist attack, Hurricane Katrina, the recent, worldwide recession, global civil wars and our increasing reliance on fossil fuels as a strong indication that the status quo is much more fragile than perceived.

News reports and dramatic images of civil breakdowns in other countries reinforce the idea that American society is not immune to the possibility of total anarchy when inflation spirals out of control and people are left with no shelter, food or water.

What Exactly Does a "Prepper" Do?

They "prepare" for emergencies by stocking up with supplies that will last them anywhere from three days up to 20 years or more. Most live outside a city limits on ranches or farms where they can raise livestock and cultivate gardens for their own sustenance as well as for their animals.

However, many city folk prep for disasters by keeping pantries stocked with bulk packages of rice, beans, sugar, flour, salt and other staples. In addition, they maintain a supply of canned meats, fruits and vegetables as well as peanut butter, powdered milk, coffee, tea and bottled water that will last several months.

If a potential disaster occurs which results in a partial or complete breakdown of society, professional health services will no doubt be minimal or nonexistent. This is especially true if a nuclear disaster devastates much of the country with radiation fallout and sickness.

In anticipation of something cataclysmic as this, a prepper maintains a supply of medicinal items conducive to treating just about any kind of injury or illness. In addition, they will also retain an excellent grasp of holistic and herbal methods of treatment in case traditional medications are not available.

TEOTWAWKI, or "the end of the world as we know it" will not only alter the easy and dependent lifestyle in which most people engage but will also wipe out the current legal and financial system. Anticipating this scenario, they understand that financial institutions will no longer operate normally and customers may not be able to access their accounts.

The digitalized money system will cease to exist as well, meaning no more ATMs. As a result, having a large amount of cash on hand will be extremely vital to purchasing essential items in the early days of the disaster. However, many believe that bartering will eventually become the only way to access provisions when the world's monetary system permanently collapses.

Being prepared for the worst today is not considered as an eccentric or extreme way of life as it once was viewed, given the popularity of television shows like Doomsday Preppers on the National Geographic Network, and hundreds of websites dedicated to prepping and survivalism currently available.

It appears more and more people are adopting the idea that being prepared for a disaster is better than suffering the consequences of a global and cataclysmic catastrophe in which those unprepared suffer grave consequences. Your neighbor, the cashier at your local fast food restaurant, your doctor, the teacher of your child and just about anyone could be a prepper for a potential disaster and you just are not aware of it.

Return from Prepper to Apocalypse Groups