One Second After: What Happens When an EMP Turns Off the Lights

William Forstchen’s novel One Second After is a big hit among survivalists not necessarily for any specific hints or guides that it provides, but for the glimpse it gives into the possible problems of a post apocalyptic world. It is a work of complete fiction, but the characters and locations are chosen with such care to make the reader understand the fear, confusion, and ultimate toughness that would come from a devastating EMP strike against the US. 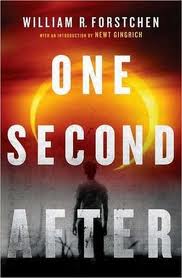 Like many post-apocalyptic novels, it is set in a sleepy town in the middle of nowhere and is told through the eyes of an unassuming hero who reacts courageously in the face of the breakdown of society. In this book, the location is the fictional town of Black Mountain in North Carolina, a small town with a small college but with a large water supply for the next town over.

The hero is John Matherson, a well-respected college professor and widower with two young daughters. He had come to Black Mountain to help his wife during her battle with cancer and is portrayed as a man with the world on his shoulders.

As the title may suggest, the book starts one second after an electromagnetic pulse attack on the US that knocks out every single electrical piece of equipment. As with a real EMP attack, it takes the characters a long time to realize that it is more than just a fault at the local power plant and it is Matherson with his Army background who is able to figure out what happened.

The first part of the story talks about Matherson’s concerns for his insulin-dependent daughter and the lack of communication with the local hospitals. However, the focus soon shifts to a broader picture of what would happen to the community when people start to realize that something is seriously wrong.

Forstchen depicts a day-by-day account of long food lines, elderly people dying without their medication and a slow but steady increase in violence as resources like food and clean water become more and more scarce.

One Second After: The Author Speaks

Lessons to Be Learned

While it isn’t a how-to guide in terms of setting up a survivalist homestead, it does raise a lot of interesting questions that anyone with a passing interest in survivalism should consider:

One Second After paints a sad picture of an unprepared world that goes to hell in a hand basket. It has the potential to become reality at any point, so use it as a comparison to your own survival preparations as you read.

Return from One Second After to Survival Books