A motorized bicycle is an affordable means of transportation that is low maintenance and can take you far on a minimal amount of energy. You can opt for an electric or gas powered bike with a two or four stroke engine, each with benefits and shortcomings, as the different features accommodate various situations. However, both are good to own in a crisis, when the electric is out or fuel is in low supply and if you need to travel off road.

A bike with a gas motor works the same as a car in that, you need to regularly fill the tank, the engine is noisy and the by-products create dirt that settles on your ride, and probably even on you. Also like the fuel you use every day for a variety of tasks, this energy source is cheaper than using electric power, making a gas powered bike the more affordable option, at least in the short-run. Another perk of using a gas engine is that it is bigger, which means it goes faster and has more power, both huge benefits in a survival situation, though not necessarily while riding through town since this type of motorized bicycle is illegal in many states.

A motorized bicycle with a battery is not only an eco-friendly option, but also an affordable one that gives you more distance for your dollar. An electric motor requires less maintenance, only needs a charge after twenty miles and the battery can last two to five years, depending on frequency of use and how hard you ride. However, when it is time for you to get a new battery, $500 of the money you saved on gas now has to go towards this purchase. 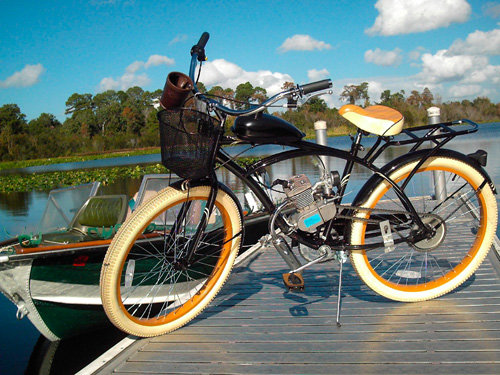 Lastly, if you need to get out of dodge, you are not going to have the ability to recharge a battery, unless you have a small portable generator. For this reason, a gas-powered bike could be better in a crisis because you may be able to bring fuel or even fill your tank with another substance, but eventually, the means to sustain either bike engine is going to run out.

The differences between a two and a four stroke motorized bicycle are important to know, as they provide a very different riding experience and each motor is not for every rider. For instance, having a two cycle engine means you have to change gears and use a clutch, which is less wear and tear on your bike but more work for you. This kind of bike gives you control but if you are not used to operating a manual vehicle, a two cycle is going to be hard for you to ride.

A four-stroke motor is just like that of the typical American car in that you turn it on and it moves. This is the ideal engine for a beginner rider to have but if you are not used to going downhill, the acceleration on this motor could be an issue. However, going uphill is also a battle because the four cycle engine does not have the speed or power that a two stroke motorized bicycle has, which means you may need to walk your bike up steep inclines.

In addition to performance, these engines also differ in maintenance and fuel. A two stroke requires you to mix oil with gas, pedal and then release the clutch to go and you cannot use the bike in full throttle until the third gallon of gas. The four-cycle motor, however, starts right up like a car, does not require you to mix oil and gas, though you do have to do an oil change every three months. You also need to remember to turn your bike off if it has a four-cycle engine, whereas the two cycle stops going when you cease to operate it.

Overall, having a motorized bicycle is a good investment because if fuel prices spike, you can still go into town and keep your house heated. If you need to get off the main road and move fast, these bikes can help you out yet again or if you plan to drive until you are out of gas and then trek it, you are not going to run into a problem. These bikes are also good if you are trying to prevent emergencies, as the more people that convert to energy efficient transportation options, the better off this planet and its inhabitants are going to be in the future.

Return from Motorized Bicycle to Bug Out The Complete Plan