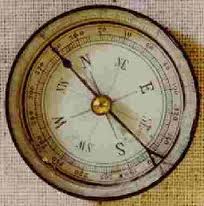 A magnetic compass is an absolute essential for your bug out bag as it will help you navigate to your base camp if all electronic devices and satellite navigation systems have been knocked out. Learning how to use a compass is very simple and after an hour or two out in the field, you should feel comfortable enough to use one in conjunction with a map to help you explore the area around your base camp for food and water sources without getting lost.

Magnetic compasses have been around for centuries, ever since people worked out that by charging a piece of metal, it would move around on it's own accord. Of course, we now know that a magnetic compass responds to the pull of the earth's magnetic field, which is currently in line with the north and south poles.

Your compass will be a charged strip of metal that is allowed to float freely either in water, liquid or a vacuum. The metal strip will be polarized meaning that the negatively charged end will always swing round and point to magnetic north. You can then match your position and heading up to your map and follow your trail successfully.

Make Your Own Compass

Realistically, even the cheapest magnetic compass should last almost indefinitely as there is no way for them to lose their charge. However, in a survival situation, things can get broken or damaged or lost, so you may find that you need to make your own compass:

It is definitely worth the time and effort to practice making your own magnetic compass out of day-to-day objects ahead of time so that you have the skill set for a survival situation. This will be a fairly unique skill which you'll be able to barter for goods and other services with fellow survivors.

Return from Magnetic Compass to Survival Bug Out