In any survival situation, it’s important to have a power source. A humless generator is a great way to go. No one wants to listen to the rattle and hum that goes with the traditional generators. It’s not just a sound issue either.

In a situation where we have experienced a total economic collapse and the ensuing lawlessness, it’s important to not draw attention to yourself. If you’re not careful, troublemakers will flock to you like moths to a flame.

If you’ve got power, food, water, and medical supplies you don’t want to advertise it. A generator that can be heard by your neighbors purring along could bring you unwanted attention.

The demand for humless technology increases daily. In a mobile world in difficult and uncertain times, humless technology is used for camping generator, emergency power, secondary power, solar portable power, emergency battery power, mountain climbing communications, off the grid power, and much more. If you are stuck in an enclosed space like a survival shelter, you will soon tire of the rattle and hum from a traditional generator. A humless generator is a godsend.

When it comes to humless generators there are a number of kinds on the market today. The following is a partial list of silent generators. 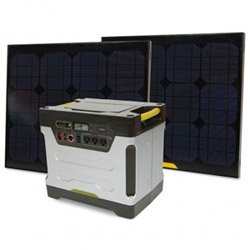 Why a Humless Generator?

The solar-powered silent generator today is more versatile than ever before. They can run off multiple renewable power sources like AC power in the home, hand cranks, solar, wind turbines, hydroelectric power, and photovoltaics.

They are the clean energy solution for fossil fuels in any emergency situation. They are safe to run in small closed in places like your survival shelter or your car. You don’t have to worry about harmful emissions. It’s much easier to keep a low profile when you’re not spewing out smoke from a gas generator or drawing attention to yourself with a non- silent generator. You can easily get a silent running generator from just under $500 to about $2000.