How to Raise Turkeys: Small-scale Turkey Farming for Meat and Sustainability

In a survival situation, knowing how to raise turkeys, as well as other small livestock, can mean the difference between being an unhappy vegetarian or a happy and healthy meat eater.

Now, if you’ve never raised turkeys, you do need to know: turkeys are not the brightest birds in the flock, and most people will tell you they are downright stupid. So don’t be surprised if you find a turkey starved to death right next to the food dish. 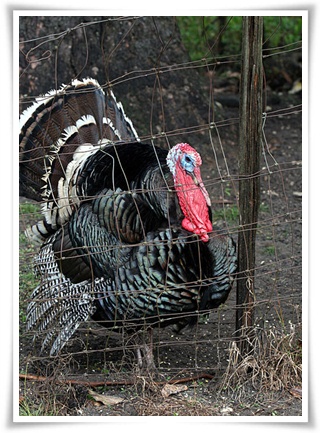 The first thing you should do, before getting your first baby turkeys (poults) is set up their environment. Using a child’s wading pool is a good way to start. Since the pools are round it keeps the poults from all crowding in one corner and smothering each other.

Line your pool with one to two inches of wood chips and bring in a couple heat lamps to bring the floor temperature to a range between 90-100 degrees. It’s important your poults stay dry and warm. After the first week you can reduce the temp five degrees a week by raising the lamps.

The next step in how to raise turkeys is to buy the poults. You should always buy them in state to reduce the travel time to get to you. That way they arrive in better condition. Spend some time with your poults in the beginning to make sure they eat and drink. You may need to show them the water by dipping their beaks in.

Speaking of water, don’t use an open bowl. The little ones may fall in, get chilled, and die. Use an appropriate chick feeder. Sometimes using bright colored marbles can attract them to their feed and water. You might want to hang an additional light above their food and water to help them see well.

Now you need to buy some feed. Some stores don’t have turkey feed and they have to special order it. Since you are learning how to raise turkeys and not chickens, so don’t be tempted to buy chicken feed. Instead, use a medicated feed of 28% for the first four weeks, then change to a feed that is only 24% protein until they reach eight weeks of age.

You need turkey feed that is medicated so your poults don’t catch Coccidiosis, a common intestinal disease. They will develop immunity while eating the treated feed. If you’re raising ten or more turkeys you should buy a 100 pound bag.

When your poults reach 6-8 weeks of age feed them a turkey growing ration that is medicated against blackhead disease. Chickens are highly resistant but turkeys have no resistance to this killer disease.

Sometimes poults will pick on each other enough to cause bleeding and even death. If they start this you’ll have to clip off half of their upper beak with dog toenail clippers. It’s best to do this on a cool day.

How to Raise Turkeys Separate from Chickens

Growing rations should be fed until they are about 3-4 weeks from butcher time. Then you can switch to unmedicated finishing rations. When you are first learning how to raise turkeys it may seem like there is a lot to do, but once you get to do it a time or two you’ll see that its not that much harder than raising chickens. Just don’t raise the two birds together. Chickens carry way too many killer diseases that will spread to your turkeys.

When dead - Dip the bird for about 45 seconds then pluck rapidly. When done singe off the little hairs with a blowtorch or alcohol flame. Cut off the legs at the joints; remove the head and then the neck from the backside leaving the neck skin attached to the bird. Next, remove the crop and neck tubes then cut around the vent and remove the insides.

And finally,…well, actually first, you should check with your city ordinances to make sure you are allowed to raise fowl on your property. Figure out what to do with the manure too so it doesn’t smell all the way to your neighbor’s house.


Return from How to Raise Turkeys to Backyard Farming