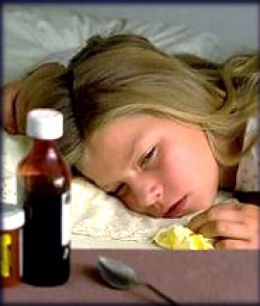 It is important to know the H1N1 symptoms, as this strain of the flu can be fatal and the affects it has on your body differ from those you expect when you have a typical flu virus.

After the apocalypse, medical care standards are to be much lower than they are currently, so you need to be aware of the natural ways you can treat this condition and prevent it from spreading, particularly among the young, elderly, pregnant and immunocompromised populations. You should also have a clear understanding of the H1N1 virus to prevent misguidance on the ways in which you can and cannot catch this type of flu.

The H1N1 virus first appeared in the United States in 2009 and became synonymous with the term swine flu, which may confuse you since this virus does not actually spread from contact with pigs. The original virus dubbed as swine flu does spread to people who have contact with pigs, such as farmers or stable hands, but H1N1 spreads from person to person.

The reason you may use swine flu interchangeably, though also incorrectly, with H1N1 is that the latter virus is a mutation of this earlier strain. Once the swine flu entered the human body, people became resistant to it so instead of dying off, the strain mutated and the final product has genetic elements from human, swine and avian flu viruses, thus allowing it to spread from one person to another.

It may surprise you to learn that the H1N1 symptoms are quite different from those associated with more common forms of the flu virus and the dissimilarities from the common cold are even greater. The H1N1 virus almost always causes a fever with a temperature of 101 degrees or more, is consistent with a dry cough and aches and pains are severe, whereas they are mild or moderate with the seasonal flu.

Those infected with H1N1 are highly likely to have a headache, as well as severe chest discomfort. In the seasonal flu, chest comfort is moderate but if it becomes severe, you need to get immediate medical attention.

The H1N1 symptoms that are key giveaways for a highly accurate diagnosis is that the fever, aches and pains appear suddenly, usually within 3-6 hours of contact with the virus. This strain of the flu also does not cause a sore throat, a runny nose or sneezing and chills only occur in little more than half of those that catch this virus.

If one person in your group develops these symptoms and a few hours later, more people start becoming ill, you know you are dealing with H1N1 and need to find medicine, as well as ways to prevent the virus from spreading or you could end up with an epidemic.

If you have the H1N1 virus, you can try a variety of natural remedies like making a tea with a teaspoon of bayberry bark and ginger root, a half a teaspoon of cayenne pepper and a cup of boiling water. You might also try mixing two tablespoons of vinegar, one tablespoon of honey, and one cup of warm water in the morning until the flu disappears. Eating garlic and foods rich in vitamin C, like berries and spinach, can help boost the immune system and onions help kill viruses in the air, as well as clear up congestion.

If you display H1N1 symptoms, put on a mask to cover your nose and mouth, wash your hands and avoid contact with others to avoid spreading the virus. Rest, drink plenty of fluids, stay warm and use as many natural remedies as possible.

See the CDC for more information on H1N1