Fire Piston Better Than Matches for Starting a Survival Fire

Although it may have been by chance, ancient innovators invented the fire piston. Evidence shows that primitive tribes in Southeast Asia and the Pacific islands have used it. The tribes possibly figured out how to make the gadget as an offshoot of the blowpipe. In the West, it was invented much later, again probably a chance discovery in the early 19th century, when air guns were made in France. In the night, the air gun would give off light due to air compression.

People used the piston for years, until the invention of matches made pistons obsolete. Today, in developed countries, the primary people who use the piston are backpackers, hikers, trekkers, and campers. 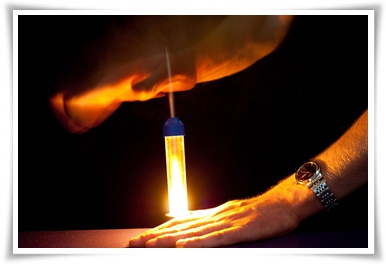 Before the fire piston, the only way to make fire was using friction. Naturalists and ancient people used fire starters like the bow drill, hand spindle, fire saw, flint and steel. Friction causes sparks, which sets fire to dry tinder that in turn lights fires. Compared to the piston, the friction methods are time consuming, laborious and tedious. The piston lights a fire with less effort and very quickly, which is important when time is of the essence.

Fire is a vital tool for survival as it cooks food and ensures safety from wild animals, other predators, and enemies. In the harsh winter, it is necessary for warmth and as a survival tool, this gadget is an easy and handy way to start a fire.

While you should keep a fire piston as an important tool in your survival kit, you can also make the piston from bamboo, water buffalo horn or hollowed out wood. You can use char cloth, amadou, cotton and other items that catch fire easily, as tinder. Be sure to gather your wood and kindling pile, and have it ready so that you can have a fire burning when you need it.

How the Piston Works

The piston is a cylindrical shape of bamboo, hardwood or horn depending on what materials are available. Looking somewhat like a syringe, this was the oldest version of the lighter. It operates on a similar principle to the diesel engine as it works on air compression. Air compression creates heat, so when the shaft is plunged in an airtight chamber, the air becomes very hot, resulting in ignition.

The fire piston comprises a hollow tube, sealed with a makeshift gasket made of thread or fiber, adequately greased as a little grease helps the gasket move smoothly. With the swift plunging motion, the air is compressed and the little bit of tinder placed at the end of the cylinder catches fire. The burning tinder is then swiftly removed or ejected and used to light fires.

Survival techniques are important even in modern times as most people have lost touch with nature and are dependent on various gadgets and machines, without which they do not think they can survive. In the event of a natural disaster, calamity, or an apocalyptic situation, you have to be able to take care of yourself and your family. It is important to brush up on knowledge of survival techniques where food and water may not be as handy as going to your kitchen, opening the refrigerator or going to a shop.

Since fire is an important, if not essential, survival tool, if you know how to make and use a fire piston, you will increase your chances of survival. Knowing how to create this device when your matches are gone will ensure a continuing source of heat for warmth, food preparation, and deterrent to wildlife predators.