Feral dogs are everywhere, and at first glance, those dogs you see at the end of the block are probably not wild dogs, but feral instead. They are growing in numbers as the economy worsens and people find they can no longer care for their pets. More and more dogs are being left on the side of our countries roads by a nation of people struggling to make ends meet. 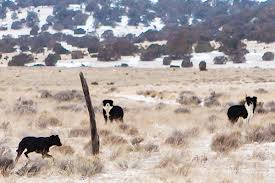 For a dog to be classed as a wild dog it has to be born wild to wild parents and have never been domesticated at any point in time. Think about those wild dogs we all used to see on those National Geographic shows on Africa.

A stray dog is one that has had an owner very recently and has just been lost or recently abandoned so it still has its owner kept instincts and can be quite friendly. If not reclaimed soon however, a stray dog will soon become feral. Now here’s where the lines tend to blur a bit.

A feral is closer to a stray than a wild dog despite appearances sometimes. In general, these dogs have been abandoned so long ago they’re not tame like they once were, but not totally wild either. They may have been born to tame dogs or even other feral dogs.

You may think you’re insulated from the problem of feral canines because you live far from where the ranging beasts live, or do not have a business that is vulnerable to these dogs. However, everyone has to eat, and it may be those feral canines a thousand miles from your home that are driving up the price of your hamburger.

Suddenly your dinner has gone from $5.95 to far beyond what you can afford because those pesky homeless canines have been devouring your steaks.

When you have nearly half the states in our nation reporting losing valuable livestock to dog packs it’s not possible for any one segment of the population to stay insulated from the problem of these dogs; it affects us all.

The Issue of Safety

One report that spanned fifteen years reported that of the 4 million plus, reported dog bites, a vast majority of those came from feral dogs. During that same time period there were 238 deaths from dog bites and a full quarter of them were attributed to these dogs. In fact, and on average, there are roughly 6 deaths that can be attributed to them each year.

Those figures are likely on the low side as there’s no central data base set up that tracks dog bites. There are a number of diseases that are spread around from dog to dog and to cattle when they are all living very close to one another. These ownerless dogs act as repositories for diseases that affect other dogs, cattle, and people.

If you eat, you’re affected one way or another by the increasing population of our nation’s feral dogs. Millions of dollars have been lost or spent because of these dogs. It’s estimated as high as half of all cattle and sheep losses, and over 60% of swine losses can be attributed to these animals.

Poultry losses have even run up as high as 85% so it’s a big problem. That’s not even taking in account of man hours and the expense that various agencies like the ASPCA and other organizations have put up to help solve the problem.

Why Talk About Feral Dogs on a Survival Site?

Many of those who prepare do so by investing in long-term provision of meat by raising cattle, chickens, goats, sheep, pigs and rabbits. Unfortunately, a pack of feral dogs can decimate a flock of chickens in a matter of minutes, and if your chickens free range they are even more at risk.

If the economy is the reason for the increase in dogs dumped in the country, then what do you think is going to happen post-apocalypse? Those people that don’t end up eating their dogs, will simply turn them loose. Also, as humans die from disease, lack of power and murder, their animals will run wild. You could easily find your neighborhood, or area of the county overrun with packs of hungry dogs who are NOT afraid of humans.

Even if you don’t want a weapon to protect your family from hungry zombies (hungry, displaced city folks), you might want one to use on those feral dogs who will have no problem turning their hungry eyes on you or your young children playing in your yard.

Never underestimate feral and wild dogs, their pack mentality means you would be seriously in danger if you crossed paths. So have enough robust weaponry with you to ensure you could defend yourself and your family.