Although non-lethal to humans, an EMP weapon is capable of incapacitating a region or even an entire country by emitting electromagnetic pulses that disrupt communication, electrical, navigation, military and vehicle systems. Also called "E-bombs", EMP devices could terminate 21st century technology systems and effectively force a developed and highly industrialized country like the United States to depend on 19th century-type technology. 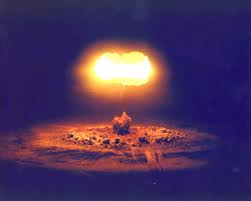 An event of this magnitude would place the country at a standstill, literally and figuratively. The expected effects of a weapon detonation include:

When an high altitude EMP bomb detonates, gamma rays produce three different kinds of disruptive "pulses" that destroy transformers responsible for transmitting vital electricity to all parts of the United States. This means that nearly 400 million people will be without lights, computers, refrigerators, water, televisions and automobiles.

Within weeks of the detonation, the lack of adequate sanitation devices will cause a proliferation of diseases associated with dirty water and rotting sewage. Hospitals will not be able to handle the number of sick people seeking treatment and many will die. Decomposing corpses that are not buried will add to the unsanitary conditions already existing in a post-EMP attack world.

Frank Gaffney, the president of the Center for Security Policy or CSP states that one EMP attack would indirectly cause the deaths of two-thirds of the population of the United States, quote:

“Within a year of that attack, nine out of 10 Americans would be dead, because we can’t support a population of the present size in urban centers and the like without electricity.”

Surviving the Detonation of an EMP Weapon

Although the military has a limited ability to intercept an EMP warhead by using anti-ballistic missile capability comprised of ground-based interceptors, the chance that an EMP device could be detonated over the United States is still great. As a result, you should prepare for such an event by fortifying your home with enough food, water, and alternative energy sources in order to survive the inevitable chaos from electromagnetic pulse weaponry.

An EMP type weapon will not affect battery and solar-powered devices. Flashlights, lanterns and radios that run on battery or sunlight energy are an essential part of any EMP-related disaster kit, provided the radio is protected in some type of faraday cage or box. Homes using solar panels or wind-generated electricity will, of course, be much less vulnerable to the disastrous effects of an EMP attack.

Those who have prepared for the catastrophic aftermath of an EMP attack should understand the implications of possessing food, water, and operational devices. When other people discover you have these items, they may try to appropriate your supplies using whatever means necessary to obtain them.

Maintaining an ample supply of firearms necessary to defend you and your family from the lawlessness generated by social upheaval and lack of government intervention will be just as essential to your survival as food, water, medical supplies, and energy.

Stocking enough food staples, dehydrated food and canned food that would last at least one year is recommended by those speculating on the length of the blackout caused by an EMP attack. Although the government and military will undoubtedly attempt to restore order, the difficulty of obtaining the parts necessary to repair the damage from an EMP weapon, and the lack of operable machinery, social unrest and rampant disease will ALL delay the recovery.