EMP Protection: Faraday Cages and Other Protection Against EMP

Implementing forms of EMP protection involves protecting electrical devices from the destructive effects of electromagnetic pulses. Non-nuclear and nuclear EMP attacks on the United States by a hostile country are both distinct probabilities, with nuclear-based EMP weapons more devastating to the infrastructure than non-nuclear devices. 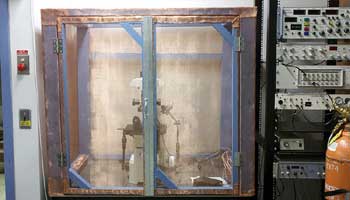 If a nuclear warhead detonated between 25 and 250 miles above the viewable horizon line, a massive pulse of x-rays and gamma radiation-containing photons would scatter and disturb the magnetic field lines of the Earth. Trapped electrons inside these lines will generate a dangerously fluctuating electric current that results in the powerful pulse capable of disabling electronic equipment.

The threat of the United States experiencing an EMP attack became so alarming that the House Military Research and Development Subcommittee and the House National Security Committee established the Graham Commission. This committee addressed vulnerabilities within civilian and military systems and recommended methods with which to provide adequate protection in the event such a device was detonated over the United States.

As a result, the Graham Commission suggested storing essential electric grid components, as well as other difficult to construct devices necessary to keep the infrastructure operating.

U.S. citizens remain gravely unprepared for a detonation of an EMP device. Most people do not have more than three days worth of food and water in their homes nor do they keep enough batteries stocked that would power flashlights, radios or other vital electric equipment for any extended length of time. In fact, many people do not know what an EMP weapon is and of what it is capable.

Without sufficient protection for EMP, the United States would experience disruptions in the following areas:

The after effects of a substantial EMP weapon detonating above the United States would create a rapid and cataclysmic breakdown in every facet of the infrastructure. It would be like pulling that one supportive card from under an immense house built of cards and watching the structure crumble in a matter of seconds.

Individuals can provide protection by keeping essential items in a metallic enclosure referred to as a Faraday cage. Made from aluminum or copper, Faraday cages enclose electronics in a cage that protects them from electromagnetic pulse effects.

A good EMP shield is a galvanized metal trashcan lined with insulation such as thick cardboard. Ammunition containers and metal filing cabinets are effective as Faraday cages as long as the insulated device is not touching the metal container in which it is stored.

You can wrap smaller electronic devices in aluminum foil to avert the disruption of EMP waves. However, you must wrap the item in plastic prior to using foil to inhibit conduction and always use two or three pieces of foil.

Lithium batteries have shelf lives of 15 years and are the best kind of batteries to keep in stock in case of an EMP attack or any other disaster. You should wrap these batteries in aluminum foil as well to avoid deactivation by detonated EMP weapons.

Methods of EMP protection further involve maintaining enough food, water and medical supplies on which you and your family will need to survive the ensuing shortages and lack of social order. With the government and military frantically attempting to restore power, the ability to quickly communicate nearly nonexistent and people suffering from the ill effects of contaminated food and water, the country will resemble one of those devastated war zones most of us have only seen on the evening news.