An emergency weather radio is a vital piece of survival equipment to include in your home and in your BOB or BOV. When electricity is inaccessible, having a solar powered or crank-type emergency NOAA radio provides vital information following the occurrence of a disaster situation as a result of severe weather. 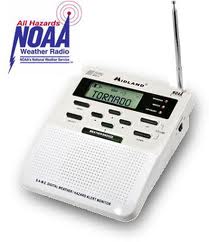 Created by the Federal Communications Commission, the Emergency Alert System immediately transmits information to specific areas concerning a variety of emergencies. Messages broadcast by the EAS are sent to satellites, cable television networks, pagers and other media outlets. Originally, the EAS was the Emergency Broadcast System, but with the development of digital technology, it was replaced in 1996 by the EAS. 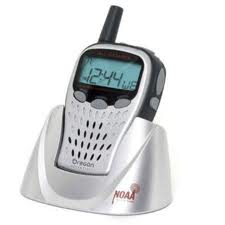 Users of an emergency weather radio can access seven VHF frequencies via the NOAA that range from 162.400 MHz to 162.550 MHz. Immediately prior to a severe weather warning, the National Weather Service will transmit a 1050 Hz alarm that activates receivers even if the sound is turned down on the radio.

The Eton ARCPT300W American Red Cross Axis Self-Powered Weather Radio is an excellent emergency receiver that provides you with information regarding impending severe weather. Product features of this radio include:

Information provided by an emergency weather radio can warn you about the location of tornadoes on the ground, expected wind speed of incoming hurricanes, how much snow a blizzard is expected to drop on a given area and if rainfall amounts will cause widespread or localized flooding.

An advisory means that inclement weather is heading your way but conditions will not warrant taking any special actions because the event will not produce significant problems as far as flooding, wind damage or snow emergencies.

Wind Alerts - If the NWS issues a "wind advisory", this means that winds are going to exceed 35 miles per hour but are not expected to increase. Caution when driving is usually recommended during a wind advisory.

Blizzard Warning - Blizzard conditions indicate the coming of a winter storm that will produce significant snowfall amounts, drifting and blowing snow and reduced visibility when driving. Winds frequently gust up to 40 or 50 miles per hour during a blizzard.

Ice Storm Warning - With an emergency weather radio, you will have enough time to prepare for the problems caused by an ice storm, a severe weather event that involves rain falling as rain but freezing upon coming in contact with extremely cold items such as cars, trees and power lines. When the NWS expects ice to build up more than a 1/4 inch, they will issue an ice storm warning due to the probability of power lines going down as well as tree limbs and whole trees.

Heat Warning - Excessive heat warnings are serious and need to be heeded so that you do not succumb to heat stroke while outside. The NWS usually transmits an excessive heat warning 12 hours before the condition is expected to affect a region. With this warning, expect a heat index of 105 degrees Fahrenheit or more to impact at least three hours of daylight for two or more days.

Being unprepared for severe weather conditions may put you in dangerous situations that could have been prevented by having access to an emergency weather radio. The NWS recommends keeping at least two in your home to provide you with the latest information following a weather disaster.