When packing earthquake survival kits, think about the comprehensive destruction an earthquake causes and what items would directly contribute to your survival as well as to the survival of your family. 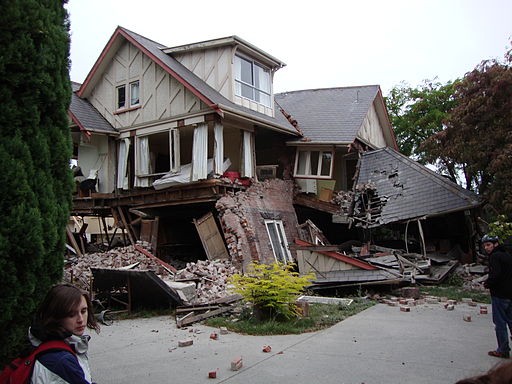 Understanding what an earthquake is and where they are likely to manifest may help in preparing for this potentially cataclysmic event. When large plates of rock lying deep under the earth's crust suddenly move or "break" along a fault line, the powerful energy released generates seismic waves producing the telltale shaking and rumbling of an earthquake. Fault line breakage is the act of rocks pushing and sliding against each other in a rough, erosive manner.

When this intense movement eventually shatters these rocks, an earthquake happens. Aftershocks are the result of rocks continuing to move slightly after the breakage has occurred. In addition, ocean earthquakes can affect land by flooding it with a tsunami, an enormous wave of water caused by undersea quakes.

Damage produced by an earthquake depends on how populated and built-up the area is. Remote and sparsely populated regions will not experience the devastation an urban metropolitan region will suffer.

Avalanches, landslides, fissures in the earth's surface and uprooted trees will represent the most damage done to rural areas. Loss of life, collapsing buildings and raging fires are just some of the main issues confronting densely populated areas affected by an earthquake.

Earthquake kits for surviving an earthquake should include:

Be prepared to experience no electricity, no running water, and minimal access to proper health services following an intense earthquake. In addition, pack your earthquake survival kits with necessities enabling your survival in the sort of climate predominantly affecting the area in which you live.

One thing that doesn’t come in any type of earthquake survival kits is something to use in defense of your life or family’s life, or to defend your preps. Some people solve that problem by getting a handgun and concealed-carry weapon license and learning how to use the weapon.

If a gun is not your style, consider non-projectile methods of defense such as pepper spray, a Taser, or even a large kitchen knife.

Staying Safe During the Quake

To remain safe in an earthquake, you must avoid places that contain overhead, loose objects capable of falling on your head or body. Avoid standing near large panes of glass, as flying glass is a frequent cause of serious injuries and deaths during an earthquake. Stay away from household furniture such as heavy bookcases, appliances, and china cabinets and resist the urge to run outdoors, especially if you live around many tall buildings.

North American regions where the probability of earthquake activity is highest includes:

This does not mean the preparation of earthquake survival kits should be neglected in other parts of the U.S. Earthquakes can happen anywhere at anytime as long as earth's subsurface remains dynamic and volatile. In fact, having separate kits for home, the office and the car is the most cautious approach.

In addition to packing essential items to counter conditions following an earthquake, you can be further prepared by using an earthquake detector. This device provides an early warning system, detecting sound waves of an impending earthquake before the actual breakage and ensuing destruction take place.

Equipped with sensitivity settings and alarm, this device mounts to the wall and uses a nine-volt battery. Capable of detecting earthquake sound emissions occurring over 100 miles away, an earthquake detector identifies not only moderate activity but minor sound waves as well. It may provide those valuable seconds for your family to grab their earthquake survival kits and find a safe place to wait out an earthquake.