Intended as a weapon that efficiently eliminates all life on Earth, a doomsday device is a hypothetical creation consisting of one large weapon or several smaller weapons detonating simultaneously. Although the possibility of such a device has only been realized in films and literature, scientists speculate that with the recent nuclear and biological warfare advances made by countries under the control of unstable governments, the potential for a doomsday weapon to exist and actually be implemented is growing more real--and more frightening. 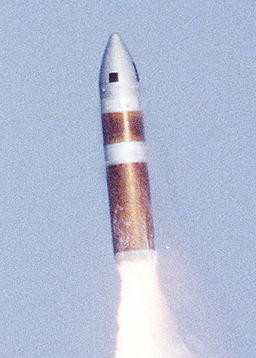 Currently, seven countries possess sufficient arsenals of nuclear weapons to destroy the planet more than ten times over. Pakistan, China, India, the United Kingdom, Russia, France, and the United States have enough warheads to eradicate all life on the face of the Earth. Even if only three of these countries were to launch nuclear weapons at each other, the resulting death, destruction, and radioactive fallout would be enough to irreparably cripple the rest of the world.

According to the Federation of American Scientists, more than 20,000 warheads exist today, with nearly 5000 of these warheads maintaining an "operational" condition and ready for use if necessary.

Since all countries possessing nuclear weaponry have the ability to detect the launch of nuclear missiles by a hostile nation, it could be said that if such an event would occur, the country being attacked would immediately retaliate. As a result, the definition of a doomsday device would no longer be just one huge weapon but a collaboration of irrational acts perpetrated by an indirect collaboration of irrational and foolish governments.

One of humanity's worst pandemics occurred between 1345 and 1351 A.D., caused by an infectious disease that killed over one hundred million people in many European countries. The bubonic plague, or Black Death, rapidly decimated the world's population at that time and generated various economic, religious, and social disturbances that forever changed the course of history in Europe.

Caused by rats infected with disease-carrying fleas, the plague produced gruesome symptoms consisting of bleeding tumors under the skin, fever, gangrene and vomiting. People suffering from plague died within two to seven days.

Today, when bioterrorism is mentioned, people think of toxic substances like anthrax, smallpox or a highly infectious respiratory agent like the SARS coronavirus. A doomsday device built to contain the microorganisms causing these diseases and released in densely populated areas like New York City, Los Angeles or London would create an instant epidemic due to the airborne nature of these germs. Unless preventative measures were implemented immediately and aggressively, a raging pandemic would ensue that could potentially be a "slate wiper".

Discovered only about 30 years ago in sub-Saharan Africa, the Ebola and Marburg viruses represent two of the most effective bioweapons available for terrorists who want to kill large populations efficiently and quickly. Ebola and Marburg possess fatality rates of 90 to 95 percent and spread via contact with infected bodily fluids, especially blood and semen, and mucous from the lungs.

Once the virus enters the body, it may take up to 20 days before symptoms appear. However, once the person begins experiencing severe headache, a swollen and painful throat, high fever, diarrhea and bloodshot eyes caused by internal hemorrhaging, death usually comes within five to seven days, preceded by a short "bleeding out" period where the person's internal organs literally disintegrate and bleed into the body.

Speculation regarding extraterrestrials from another planet sending a machine capable of destroying Earth has existed for decades, beginning with the UFO flaps of the 1950s and the paranoia caused by communism and the Cold War.

Wandering black holes arbitrarily sucking in the solar system could be considered another sort of unintentional doomsday scenario, along with asteroids striking the Earth, collision with comets and even the Sun unexpectedly experiencing massive instability that results in temperature increases capable of turning the Earth into molten rock.

Most political scientists agree that the most likely doomsday device will be nuclear weapons used in an all-out global war, resulting in a no-win situation and the end of the world as we know it. While surviving other attempts at doomsday weaponry is feasible, surviving a worldwide bombardment of nuclear warheads is, at best, minimally realistic and powerfully questionable.