A radio powered by an electricity- producing dynamo generator is called a crank radio. Inside the radio is a small device made of rotating wire coils and magnets that convert kinetic energy into a DC (direct electric) current by using Faraday's law of induction. 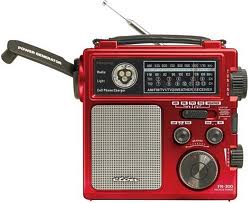 The stator is an immoveable structure providing the necessary magnetic field that, when combined with the rotation of an armature, forces the magnetic field to press against the electrons within the coil. When this pressure activates electrons, an electrical current is created and the device in which the dynamo lies begins to perform certain functions.

Radios that rely on alternative energy sources such as solar power or dynamo generators are referred to as emergency radios since they can be used when electricity is inaccessible due to natural disasters or other catastrophes. A crank radio is so-called because it requires "cranking" (turning) a handle attached to the side of the radio several hundred times to generate enough electricity for it to function.

Emergency radios are capable of receiving the following frequency bands:

Some emergency radios have shortwave capability that can pick up shortwave bands one through four as well as aircraft band 118 to 137 MHz. 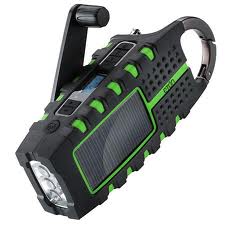 With excellent charging abilities (500 turns equals two hours of operation) and the addition of a superior LED flashlight, the Eton Scorpion is a popular emergency radio among preppers and outdoor enthusiasts.

Other features of this emergency radio include: 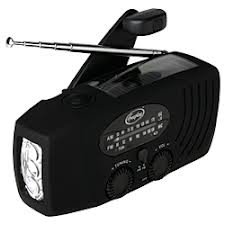 Consider a forerunner of manufacturing crank radios, Freeplay makes the Companion emergency radio for hard-core outdoors enthusiasts and those interested in preparing for a disaster. In addition to a dynamo generator, this radio also provides solar panels that charge more efficiently than most solar powered emergency radios.

Moreover, cranking the Freeplay Companion for one minute provides you with 20 minutes of power, more than enough time to check weather conditions and monitor important information given during a disaster situation.

Equipped with five different charging methods, this radio will be sure to work in any kind of disaster scenario. Use its wall outlet, USB device, solar panel, hand crank or car charger options to give it enough power to last as long as six hours. However, be aware that charging by sunlight will take about eight hours.

The Ambient Weather Adventurer also includes an LED flashlight, flashing alert indicator, seven-channel weather band and weighs only a half a pound.

Shortwave radios receive frequency transmissions between three and 30 MHz. They can be heard all over the world due to the shortness of the wavelength that facilitates propagation of the signal over thousands of miles. By adhering to the Earth's curvature, shortwave signals remain closer to the Earth rather than dissipating into space.

Having access to a shortwave crank radio during a disaster allows you to listen to worldwide transmission regarding the disaster as well as talk to others who may have important information of which you are not aware. Amateur radio broadcasts are transmitted using SSB (single side band) or LW (long wave) and MW (medium wave) bands for ship to shore communication.