Although the Cold War ended more than twenty years ago, chemical and biological warfare still poses a threat to many countries, including the United States. For this reason, it is important for residents of this country to, at the very least, have knowledge of warfare agents, their impacts and ways to possibly prepare for such an event.

You need to know facts, not make assumptions, listen to hearsay, or believe myths, as these may cost you your life in an emergency situation. 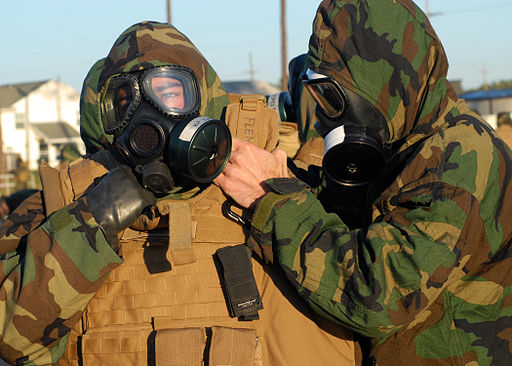 A number of chemical and biological agents exist and with modern science, technology and a bit of crazy genius, new poisons are entering the market, whether disclosed or not. Alarmingly, these agents are becoming available to some people outside of the military, such as terrorist organizations. The most common type of biological and chemical warfare agents available for use today include nerve agents, toxins and skin-damaging poisons.

Skin-damaging poisons, while not a largely diverse group, do have significant side effects, such as damage to the eyes, lungs and other internal systems of the body. These problems can occur from simple skin absorption and the extent of the damage often correlates with the amount and type of agent to which a person gains exposure.

Any or all reactions are possible if a person encounters the mustards, phosgene oxime or lewisite, the most prevalent and common among the modern day skin-damaging agents.

Toxins are the most interesting of the biological and chemical warfare agents simply because they can come from almost anything. A person with the capacity to do so can create a toxin from fungus, algae or snake venom, enhancing its effects and even altering the method by which it poisons.

For instance, fungus tends to be harmful when ingested but it is possible for someone to turn it into a powder that enters the body on contact or by inhalation. When it comes to toxins, almost anything is a threat, as science and technology allow the opportunity for alteration and mutation.

While toxins may be the most interesting category, nerve agents are the most important of the chemical and biological warfare agents, which is why they have their own category. The discovery of nerve agents occurred in Germany and resulted completely by accident while trying to create an insecticide.

Since that time, nerve agents have continuously played a role during wartime, as new versions have come into existence through the use of extremely poisonous chemicals known as organophosphate compounds and phosphoric acid esters.

Nerve agents come in the form of a liquid or a vapor and once exposed, they inhibit your bodily functions by blocking communication between nerve cells.

Basically, every part of your body has nerve cells, all of which send messages to the brain so that it can perform the appropriate function at the appropriate time. If your brain is not receiving these messages, it cannot tell your heart to pump, your blood to flow, your legs to run, your bladder to contract or any other functions.

As a result, most nerve agents cause a person to die or live with paralysis, but if you are lucky, you may only suffer irritation or damage to your digestive tract, mucous membranes, glands, muscles, airways, or vision.

If you are in the military, you should have the training to respond and protect yourself in the event of a biological or chemical attack, but for all of you civilians, here are a few tips.

1. First, you may opt to invest in a chemical protection suit, complete with gloves and boots, along with a respirator mask, so that your skin and airways remain unexposed.

2. Next, if you have the money and take things to the extreme, you could build an underground bunker, fallout or nuclear shelter. Some homes still have them from decades ago and others, though uncommon, do build them just in case.

3. Third, and much less extreme, you may want to do some research and learn about your community’s emergency preparedness plan.

4. Lastly, you may want to talk to a college professor, since most doctors are too busy and are likely to look at you like your crazy, about possible remedies or treatments that can alleviate or minimize the damage of chemical and biological warfare agents, should you ever gain exposure to such a poison.

Chemical and biological warfare is a real and scary concept that unfortunately, is part of the modern world. The United States, throughout history, proved to be a strong, successful, safe, and thriving nation but anything is possible and the country has had its share of terrorist attacks or attempted attacks.

So, while you shouldn’t panic and fear your world is coming to an end, you should also not remain naïve or ignorant about the real world and its possibilities.

Return from Chemical and Biological Warfare to Doomsday Clock