For the most part, I treat canning recipes like I do most other recipes. I look at the recipe, then based on what I have on hand or can substitute for what the recipe calls for, I get creative. Being modest I must say that most times the results are great, but being honest, there have been a few less than spectacular dishes created. 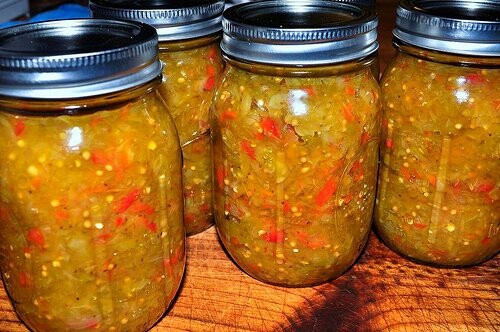 Of course, there are times when even I use and carefully follow a recipe, either because I want a successful result or because I want to be safe. Like when I’m baking a cake or bread, I’ll follow the recipe, as I will when making pickles. Perhaps that's why I like making pickle relish instead of pickles...more leeway for creativity.

The one thing about my canning efforts is that I love experimenting and being creative, while using up whatever produce I have on hand. Also because I’ve tried canning pickles with little success, I’ve learned to concentrate on relishes, often tossing in everything BUT the kitchen sink.

Here are a few of my favorite canning recipes, but you’ll notice that I don’t really have any quantities, because this recipe…like all my canning recipes…changes with every batch depending on what’s coming out of the garden.

Someone gave me tomatoes, cucumbers, zucchini, onions and hot peppers. I added fresh garlic, cilantro, celery and carrots and ran it all through the food processor for small chunks for about 12-14 cups. I put everything in a large pot and set it on the stove to begin cooking.

Bring to slow boil and let simmer for about 15 minutes, stirring occasionally. Pour entire pot contents through a large strainer to remove as much liquid as possible.

Prepare your pint jars by sterilizing in a water bath canner. Fill pint jars to within one inch of the rim. Wipe rim with vinegar on a paper towel. Put on lids and rings on tight. Place in water bath canner and process in boiling water for 10 minutes.

Ingredients include any quantity, some or all, of the following vegetables:

Run everything through the cope mode of your food processor; don’t puree. Put in a large stock pot then add the following:

Bring to boil; stirring occasionally to ensure sugar is fully dissolved. Let simmer for about 10 minutes.

Fill pint jars to within one inch of the rim. Wipe rim with vinegar on a paper towel. Put on lids and rings on tight. Place in water bath canner and process in boiling water for 10 minutes. 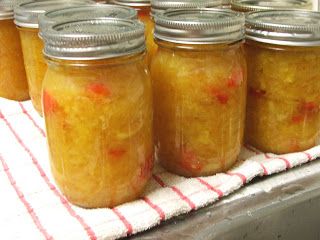 Process the following through the food processor on chop:

In a large stock pot, mix the chopped vegetables with the following:

Bring to boil, then let simmer for 10 minutes, stirring occasionally.

Fill pint jars to within one inch of the rim. Wipe rim with vinegar on a paper towel. Put on lids and rings on tight. Place in water bath canner and process in boiling water for 10 minutes.

Serving idea:  Mix well with one pound of pork sausage and two raw eggs. Place raw pie crust in the bottom of a pie pan. Fill pan with apple sausage mixture. Top with shredded cheddar cheese. Bake at 350° F for 35-40 minutes until the meat pie is done.