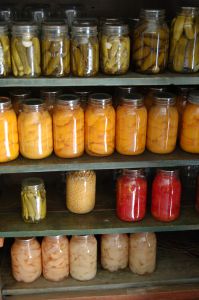 In addition to Ball canning jars, or any type of canning jars, you will also need quality canning lids to ensure that you don’t experience canning failure due to bad jars or bad lids. So you can make an informed decision for your long-term storage efforts, we’re going to look at the different brands of canning jars and lids.

One of the most important things to know about canning jars is that you must use glass jars specially-designed for canning. You cannot use mayonnaise jars, although you once could use them, their current construction makes them very dangerous to use for canning. You also should not use jelly jars, spaghetti jars or other glass jars for canning, unless they are the following brands:

While all canning jars mouth size was “small” at 2 3/8 inches, Kerr’s introduction of the wide-mouth jar absolutely changed things for the home canner. The 3-inch wide mouth makes filling the jars much easier, and has actually made new recipes possible, such as bread baked in canning jars.

In addition to wide-mouth Ball canning jars, you will find that Golden Harvest also offers the same wide mouth jars once exclusive to Kerr.

On a personal note: After several years of canning, I’ve decided that from now on I’ll only purchase wide-mouth jars. While the lids cost a bit more than the small lids, the ease of filling and cleaning the jars makes them my favorite.

Since introduced by Kerr, manufacturers of Ball canning jars and other glass canning jars also began producing jars that exclusively used the two-piece lid and ring, or band, system. This new system was brilliant on the part of the manufacturers because it guaranteed a market for the one-use lids.

Before the two-part system was introduced, Ball canning jars themselves were two parts with a glass lid attached by a metal bale. A reusable rubber ring was used to create the seal between the glass lid and the glass jar. While the rubber rings would eventually wear out, they would last through many uses.

As with any manufacturing company a product that must be replaced more often or only has one use is always a better idea, guaranteeing sales and profits. That’s capitalism at its best. 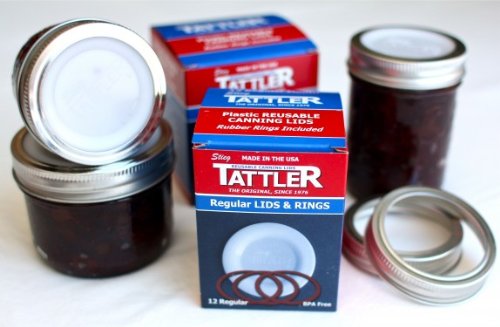 However, once again ingenuity has developed a multi-use lid sealing system. The Tattler lids are ceramic lids with a rubber seal that can be used with regular metal rings. They can be a bit tricky to use, and they definitely are a bit more expensive than the metal lids.

However, when you figure that they can be reused for years, the cost goes way down. Also, when you are planning for long-term survival when you might not be able to find the one-time use lids, stocking up on the Tattler lids might be a good idea.

Note: On some survival and canning forums you’ll find discussions about reusing the one-time-use metal canning lids, if they have been carefully removed so as to avoid bending and denting of the lid.

They advocate careful inspection to ensure the rubber is intact and there is no rust on the lid. They then boil the lids in water to which a couple of tablespoons of baking soda have been added prior to the next use.

We don’t recommend this, but each person must make their own decision.

The next time you go shopping for Ball canning jars, make sure you pick up an extra two, three, or more boxes of lids.