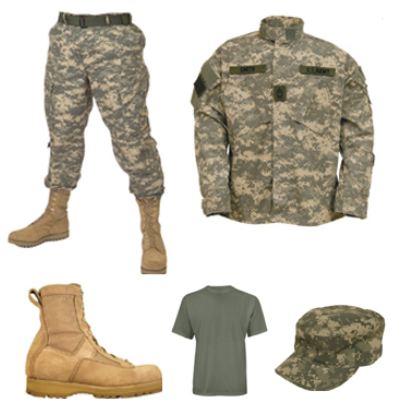 Army clothes are of course special issued and reserved only for the members of the military, but the camouflage style, ideal for hunting, and the respect associated with the uniform have turned the once unique look into a long-term fashion trend. Depending on your purpose for this style of clothing, you may want the real deal or simply settle for the look-alike version. In either case, both offer a variety of benefits but also have their own downsides as well, making it beneficial for you to know the pros and cons of each prior to making a purchase.

If you are like most people, you probably want the authentic military clothes not just for their functionality but also for the prestige and honor associated with the uniform. Aside from the camouflage design, a style now incorporated into everyday fashions as well as hunting gear, army clothes do have other benefits.

For one, when wearing these clothes, people, whether they know you or not, are always going to think of you as a good person, a hero and someone trustworthy. However, if you are not a member of the Army and an enemy spots you, you become a target with no training as to how to protect or defend yourself from someone so dangerous.

Other than receiving unearned praise if you are not in the military and blending in, army clothes have real survival benefits that can protect you while spending time outdoors or in conditions that are not sanitary. For instance, one type of military clothing contains silver, which prevents odor, minimizes the growth and spread of bacteria, algae and fungus, provides warmth and resists damage. In fact, military issued clothes tend to be free of toxins and they are not corrosive, flammable or explosive.

The fabric used to create government uniforms is also unique in that it is breathable, dries quickly and is resistant to moisture, all of which again prevent the growth of bacteria and the development of odor. A final interesting feature, which you probably wish was available in all your clothes, is the ability of military attire to release or repel stains, making the uniforms clean and spotless, a standard expectation of all those donning the United States issued gear.

You could buy military style gear, t-shirts with the word Army printed on them or pick up a pair of camouflage coveralls, socks and boots in any number of stores, all of which may give you the prestige you want or the ability to blend in with nature. However, if you want army clothes for survival purposes, you are not going to find that in a reproduction.

Of course, you can find mass produced replicas that offer warmth and are resistant to water or waterproof. However, unless you invest a lot of money and plan to wear many layers of clothing, none of which look like those issued to the U.S. Army, you are not going to get the hygienic benefits and your clothes are still going to be flammable, corrosive and explosive.

Army clothes are government issued for a reason, though it would not be the worst thing to have people walking around in anti-bacterial clothes that prevent odor. If you need gear of this quality because some cataclysmic event occurred or you think it might in the future, you are going to have to make friends with some members of the military and convince them to purchase clothes for you, though that is not even legal.

It is actually against a federal law, listed under Title 10, Subtitle A, Part II, Chapter 45, Section 771, for a civilian to wear a military uniform, though some exemptions do apply. Of course, once you remove all insignia and patches, you once again have camouflage clothes, which you can often find for sale in military surplus stores.